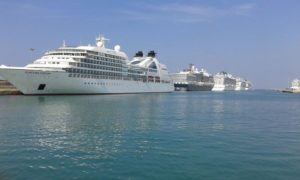 CIVITAVECCHIA – This morning the President of the Port Authority of the Northern Central Tyrrhenian Sea, Francesco Maria di Majo, together with the Director of the Technical Area, Maurizio Marini, received the representatives of the Consorzio Stabile Grandi Lavori and the consortium company executor RCM Costruzioni S.r.l. of Sarno (Salerno) for the delivery of the construction site concerning the construction of the jetty of the new ferry dock in the ‘‘ BClink: MOS for the future ’project.

The realization of the project, co-financed by the European Commission, is of fundamental importance to respond to the increase and further development of Ro / Ro and Ro / Pax traffic not only on the increasingly competitive Civitavecchia – Barcelona route, also because of the environmental advantages, but also, by virtue of the promotional activity that the Authority is carrying out, on the potential new maritime lines with North Africa.

“We are in a very important phase for the Motorways of the Sea. Thanks to the ‘BClink’ project, we will have a further strengthening of the intermodal corridor between the port of Civitavecchia and the port of Barcelona with benefits not only in terms of traffic but also in terms of safety and the environment. Intermodal transport, in fact, in which the maritime component is prevalent, determines undoubted advantages over the reduction of harmful emissions into the air, compared to transport by road, and contributes to decongesting traffic on our roads and highways ”, declares the President of ‘Port System Authority of the Northern Central Tyrrhenian Sea, Francesco Maria di Majo. “With the completion of port infrastructure works such as the new ferry dock, the port of Civitavecchia will therefore rise to the true pole of the Ro-Ro and Ro-Pax segments (mainly scheduled connections with Tunis and Barcelona) of Central Italy” , points out Majo.

The work, which will presumably be completed in 12 months, will also have a positive impact on employment. “For the R.C.M. Constructions, this intervention represents – declare the representatives of R.C.M. Costruzioni S.r.l. Elio and Eugenio Rainone – the possibility to confirm the consolidated experience of our group in the construction of important port infrastructures, adding the Civitavecchia intervention to the list of works carried out and underway in numerous and important Italian ports ”. The task, through the engineer Tommaso Tassi, of supervising the executive design, coordinated with the improvement proposal, is to F&M Ingegneria, a European leader in the field of maritime works design.

The company Rogedil Servizi S.r.l., which oversaw the construction of the entire ferry dock, will take care of the direction of the works in the person of the engineer. Alessandro Guerra, in compliance with the current protocol of legality and the Framework Agreement signed by the AdSP with ARPA Lazio to monitor the environmental matrices potentially affected both during the execution and during the completion of the work.