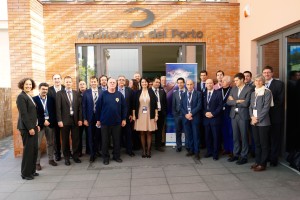 Two intensive days dedicated to WiderMoS core contents with a high level attendance. More than 160 persons attended at the conference hall, about 40 speakers brought their contribution to the conference This event represented an opportunity to discuss about the future development of the MoS in supporting internal and external trade in Europe in the framework of EU maritime policy, macro-economic trends and business considerations by the stakeholders.

In 2013, WiderMoS project was financed by TEN-T programme and started involving four EU Countries (Italy, Spain Portugal and Germany), five EU core ports (La Spezia, Barcelona, Kiel, Rostock and Leixoes) and more than 100 stakeholders. All the actors have the same goal: improving the logistic supply chain in a more efficient and faster way.

La Spezia Port Authority, the project leader, wanted to connect the Motorways of the Sea with the European TEN-T network using the port as a hub of connection between the sea and the inland, using information technology applied to the supply chain.

The focal point was the exchange of data between all the logistic actors from ports, through inland terminals, to end consumers.

The corridor will be functional and operational for the real needs of goods and international markets. The port will symbolize a new opportunity of interchange between sea and inland. It was necessary to create a network to increase the European connection from the Mediterranean Sea to the central and Northern Europe.

Relevant national and international authorities participated to the final conference. The conference was divided in several different sessions. From one hand, the partners of the project explained in WiderMoS sessions their outcomes from IT to Policy point of view, on the other hand, several actors from different EU countries and Extra EU countries gave their perspective about the possibility to extend the tools developed in WiderMoS up to their countries.

Federica Montaresi, WiderMoS Coordinator, managed the project in efficient way and redesigned rules and tools of the concept of the fast corridors and the efficient logistics services for the supply chain. She told that the WiderMoS represents an opportunity to meet the real needs of the markets and to improve the Motorways of the Sea for supporting the maritime transport integration into the global door-to-door logistic chain. Thanks to WiderMoS project, the Port of La Spezia has played a key role in European projects and it is ready on new opportunities of funding in future projects.

Brian Simpson, the European Coordinator of Motorways of the Sea, explained that the connection created by this network allows the possibility to invest in material and immaterial infrastructures, the opportunity to improve the market and the efficiency of the supply chain. Under these conditions, the Port plays a key role inside the logistics chain and WiderMoS respects this goal.

In addition, Mr Simpson explained the change of TEN-T regulations and the new three targets: the environment, promoting the use of new alternative fuels such as LNG; the change of supply chain, from the production to the distribution; the future of the safety of passengers and workers along transport chain. He concluded his speech underlining the key role of the port of La Spezia. Every port should take as example of the action of La Spezia port, converting the tools of WiderMoS project in actions.

During the interview José Anselmo, the principal Administrator of TEN-T Policy – Motorways of the Sea – DG MOVE, told: “We are part of the same continent and we should support the market. It’s a challenge, but also a big opportunity. Thanks this project La Spezia Port became one of the most important European port.”

The most evident outcome coming from the conference is that all the speakers and expertise consider WiderMoS project as one of the most relevant EU project about logistics and intermodal transports. The tools of the project should be replayed also in the other EU countries and Extra EU countries, and the interest of the guests was so great that WiderMoS sets the stage to a new methodology to see the dimension of the Motorways of the Sea.