Shipping, Ports and Transports / Transport /
18 May 15 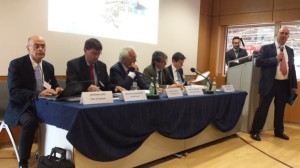 The WiderMoS (Wide Interoperability and new governance models for freight Exchange liking Regions through Multimodal maritime based corridors) consortium organised a successful event in Munich on the 7th May during Transport Logistic 2015, the most important exhibition in the field of transport and logistics in Europe.

The event “New business opportunities in Logistic: the WiderMos approach to streamline the maritime transport integration in the door to door logistics chain” has been attended by more than 60 operators and key players in maritime, transport and logistics.

The event has been opened by the Consul General of Italy in Munich Mr. Filippo Scammacca del Murgo who stressed the importance of the commercial partnership between Italy and Germany, especially in logistics, enhancing also the role of the European projects to support the cooperation between the two countries.

Logistics operators, stakeholders and participants have taken the opportunity to discuss about  Motorways of the Sea, logistics corridors, intermodal transport, optimization of logistics and customs processes and maritime port/dry port integration.

The event was a great success for the participation of the most important players of the industry and also for the engagement in the debates about the themes treated: a successful way to interact and develop new ideas.