Shipping, Ports and Transports / Transport /
15 May 17

Who will pay for China’s new Silk Road? 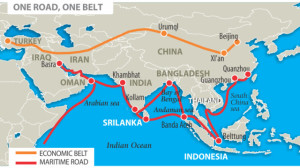 According to an estimate by the Asian Development Bank, there is a funding gap of US$26 trillion for the infrastructure projects that will be required in Asia by 2030. China’s “Belt and Road Initiative” is designed to help meet this shortfall, but the plans for the belt and road scheme raise the question of how it will meet its funding demands.

What agencies will China use to help fund belt and road projects?

In addition to existing multinational lenders – such as the China-Africa Development Fund, the Asian Development Bank and the World Bank – China has created new financial agencies in recent years, on its own or with other countries.

The Silk Road Fund was set up at the end of 2014 to finance belt and road projects. It has US$40 billion in capital from China’s foreign exchange reserves and policy banks – China Development Bank and Export-Import Bank of China.

Jin Qi, the head of the Silk Road Fund, said it had invested US$6 billion in 15 projects. It has also set up a US$2 billion fund for projects with Kazakhstan.

The Asian Infrastructure Investment Bank (AIIB) began operations in January 2016 with US$100 billion in capital, but it provided less than US$2 billion in funding last year. It has 70 members, most of them involved in the belt and road initiative.

Most of its projects involve co-funding with other multinational development institutions, such as the World Bank and Asian Development Bank.

The New Development Bank (NDB) is the lender that typically handles funding demand for the BRICS – Brazil, Russia, India, China and South Africa. It began operations in July 2015.

The NDB obtained AAA ratings from Chinese credit agencies last year, to issue yuan-denominated bonds. This year, the NDB will also issue bonds denominated in Indian rupee, once it gets the appropriate international credit ratings.

Both the AIIB and NDB hope to get top ratings this year from foreign credit agencies, a milestone that would allow them to raise funds with low costs in the global capital market.

Is China working with European lenders on the belt and road plan?

China joined the European Bank for Reconstruction and Development at the end of 2015, as part of its promotion of the belt and road scheme in Europe. It also agreed to participate in the EU’s Juncker Project, a massive €315 billion (HK$2.67 trillion) investment pact.

The Export-Import Bank of China led the start-up of the China-Central and Eastern Europe Investment Cooperation Fund in 2014, with the first phase of funding totalling US$435 million. The fund, registered in Luxembourg, has invested in two energy projects in Poland.

The Industrial and Commercial Bank of China set up Sino-CEE Financial Holdings in Riga, the capital of Latvia, in 2016. The company will manage a fund targeting investment in central and Eastern European countries. The fund aims to raise €10 billion and mobilise €50 billion in bank loans. Poland, Latvia and the Czech Republic are now discussing participation in the fund, while Chinese investment conglomerates such as China Life Insurance and Fosun Group are involved in its investment and management.

What role do Chinese state firms play in overseas investment?

State-owned enterprises have been the major force behind China’s overseas expansion, which first began half a century ago. It is hard to measure the return from these overseas investments, but news reports and comments from officials and company executives suggest profits have been modest.

State firms are often highly leveraged or have blurry financial structures, raising concerns about them in other countries.

Does China have a strategy to pay for the plan? Zhou Xiaochuan, the governor of the People’s Bank of China, says governments cannot fund all the projects envisioned in the belt and road initiative.

He suggested that countries involved in the strategy work with capital markets, set up dedicated financial agencies of their own and try to make use of local currencies, including the yuan.

Further details about funding the belt and road scheme will be discussed at the summit that begins on Sunday in Beijing.