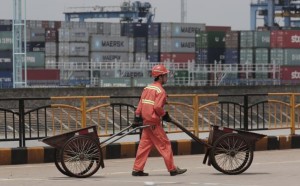 London – Ports in the west are speeding up the upgrading of infrastructure and building new terminals to catch volume from China amid the “big ship era”. As the industry has suffered a significant downturn, building larger ships to improve efficiency has become a priority for shipping lines, and most big ships are used for the vital Asia-Europe route. Peel Ports, the Liverpool-based second largest port group in the UK, will usher a new deep water container terminal in its core Liverpool port called Liverpool 2 next year, to accommodate the expanded container fleet. The investment is worth over US$510 million to create Europe’s first semi-automated container port on reclaimed land. “The new port will target 13,000 to 14,000 teu (20-foot equivalent unit) ships from China and greater Asia,” said Jeremy Masters, Peel Ports’ Asia Pacific Regional Director. Masters said people in the UK has seen vibrant demand for goods from China, such as clothes, toys and other household products. As the trade relationship between China and the UK heats up, he expects goods moving between the two countries to increase.

The port already built up a good relationship with China as it has signed a £100 million (HK$1.17 billion) deal with Shanghai-based Zhenhua Heavy Industries to buy cranes for Liverpool 2, and the first five China-built giant cranes arrived in Liverpool in November. Direct shipping from Asia to the northern part of UK has been difficult due to limited port capacity. Liverpool 2 will be able to accept 95 per cent of the global container vessel fleet, and accommodate two 13,500 teu post-Panamax vessels at the same time, according to the company. More than 50 per cent of the UK population lives in the north that is close to ports such as Liverpool, compared to competing ports in the southern UK, Masters said. Carriers can save up to 400 pounds (US$600) per container by bringing ships directly to Liverpool for the north UK market which includes Ireland and Scotland.

“(Some) 90 per cent of containers enter the UK through the southern ports, we want to take business from them,” Masters said. On the other side of the world, ports in the US also actively made infrastructure investments to handle the larger ships from China to boost trade. Port of Miami in Florida just completed its deep dredge project and on-dock intermodal rail in September by spending more than US$1 billion.However, industry experts don’t think such expansion will lead to overcapacity in ports. “Europe and US ports operators are still very cautious. Most investments were upgrading such as dredging channels and buying bigger cranes, instead of constructing new terminals,” said Han Ning, senior consultant at shipping consultancy Drewry. In terms of a carriers’ choice of port to call, Ning said the priority would always be the size of the hinterland. “Even though the water depth is poor for ports in Shanghai and Rotterdam (the two busiest ports in the world), no carrier will give up on them.”