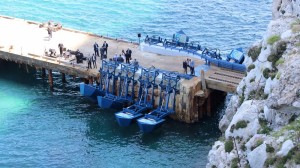 Ports are an integral part of global trade and commerce which are known for operating and handling large scale operations which consume sizeable amounts of energy, resulting in larger day to day expanses and pollution-related effects, writes Inna Braverman, co-founder Eco Wave Power.

Port authorities and terminal operators are constantly looking for ways to reduce their fuel bills and carbon footprint.

Unfortunately, ports are still a significant contributor to the global issue of carbon release into the Ozone. For example, according to an Economic Commission for Latin America and the Caribbean (ECLAC) survey, it is estimated that the region’s container activity emitted 865 mega tones of CO2 in 2013.

But what if there was a renewable energy method that was able to use a port’s existent infrastructure to capture natural resources for electricity supply? A company called Eco Wave Power is making this possible.

Eco Wave Power
Eco Wave Power is an Israeli based company (with subsidiaries in Gibraltar, China, Mexico and most recently also Chile and India) that has developed a proprietary technology for extracting energy from ocean and sea waves and converting it into electricity.

This onshore and nearshore technology is installed on man-made structures including breakwaters, docks, piers and jetties, which allows easy access for installation and maintenance of the power station and also eliminates the high costs involved in long electricity transmission lines.

Moreover, by connecting to existing man-made structures, EWP eliminates creating a new “presence” in the sea or on the sea floor, which has eliminated any objection by environmentalists to a new power station. In addition, such usage of the sea walls protects the marine structures against a phenomenon known as coastal erosion.

Port infrastructures often deteriorate due to the harsh ocean conditions creating extra costson repairs and maintenance. When oncoming waves hit the port’s breakwaters, their erosive power is concentrated on the stagnant port structure. This shortens the life span of the breakwater, therefore causing large scale expense for its renovation. When the EWP power station is installed on the breakwater, the waves that crash into the structure is somewhat stopped byfloaters, which are basically turning a destructive source of energy into clean and green electricity.

Harnessing wave energy
We harness the wave energy through uniquely shaped buoys that rise and fall with the up and down motion of the waves. The pressure caused by the motion of the floaters is then delivered to the land located power station.

EWP’s unique conversion system, uses the pressure to spin a hydro motor, which is used to spin a generator, producing electricity and sending it to the grid. The whole system is controlled and monitored through a smart automation system.

A clear advantage of our technology is that only the floaters and pistons are located in the water, while all the technical sensitive equipment operates on land, thereby improving reliability and providing easy access for maintenance and repair. Actually 90% of the cost of the EWP system is located on land, so costly offshore maintenance operations (which includes the usage of divers and ships) is not required.

In addition, EWP’s unique wave energy devices have a revolutionary storm-protection mechanism, which lifts the floaters above the water level or sinks them under the water level, when the waves are too high for the system to handle. When the storm passes, the floaters commence operation.

Gibraltar grid power
Over the years, EWP has gained significant experience working with marine structures and infrastructures for wave energy generation. One of EWP’s recent achievements is constructing the first 100KW grid connected power plant in Gibraltar, which was co-funded by The EU Regional Development Fund.

In May 2016, EWP and the Government of Gibraltar held an official opening ceremony for the newly constructed initial 100KW of a 5MW wave energy power station on the east side of Gibraltar which is located at a former World War II ammunition jetty.

The wave power station in Gibraltar was opened alongside with HM Chief Minister of Gibraltar, the Hon. Fabian R Picardo and the Minister of Health, Environment and Climate Change, The Hon. John Cortes. The project is the only grid connected wave energy array anywhere in Europe, operating multiple wave units, under commercial PPA (Power Purchase Agreement) terms.

The opening ceremony started with a conference event held at the Caleta hotel, in which David Leb and I gave presentations overviewing the project and the strong cooperation with the Gibraltar Government. In addition, we witnessed inspiring speeches from Dr John Cortes, the CEO of the Gibraltar Electricity Authority, Michael Caetano, the Director of European Programmes, Mr Charles Collinson Esq., the Chief Executive for the Department of the Environment of Gibraltar, Dr Liesl Torres and the CEO of Eco Wave Power Mexico, Mr Ernesto Delarue.

The Gibraltar Project was officially “switched-on” by the Chief Minister of Gibraltar and by The Minister of Health, Environment and Climate Change.

Upon completion of the whole 5MW, this site will provide Gibraltar with 15% of its overall consumption of electricity, putting the country well in line with the EU Renewable Energy Directive target of 20% renewable energy by 2020.

EWP also has an operational power station in Jaffa Port in Israel and currently has 111MW on order from ports all over the world.

In summary, Eco Wave Power technology is very attractive for ports because its implementation minimises the ports’ pollution rates and footprint while also producing cost-efficient electricity, which can be used for self-consumption but also could be sold to the electrical grid for quite high and subsidised feed in tariffs. This in turn creates an additional income channel for the ports from their natural and free resource.

Moreover, a station’s installation will minimise the on-going problem of breakwater erosion in ports.

Also, the construction, operation and maintenance of the power station creates direct and indirect work places and can assist in developing a new industry around the port. The EWP power station is also very much visually pleasing and therefore promotes the Eco-tourism to the locations of implementation. For example, EWP’s power station in Gibraltar has already hosted schools and business delegations from The Philippines, Korea, Mexico, Monaco, Israel, Italy, Spain, Chile and many other countries.

The World Energy Council estimates that approximately 2 terawatts (2 million megawatts), about double the current world electricity production, could be produced from the oceans via wave power, we believe that ports should be and will be an integral part of the realisation of such an estimate.