A new LNG terminal will be designed by Wärtsilä: the company has been given full notice to proceed with the construction for a new a liquefied natural gas (LNG) import terminal in Tornio, Northern Finland.

Wärtsilä, a leading global supplier of power plant and ship power solutions and services, has signed a turnkey contract to supply a liquefied natural gas (LNG) receiving terminal to be built in Tornio, Northern Finland. The contract, valued at approximately EUR 100 million, has been made with Manga LNG Oy, a joint venture between the Finnish companies Outokumpu Group, Ruukki Metals Oy, Gasum Oy and EPV Energy Ltd. The contract is conditional on receipt of investment support and Manga LNG Oy’s contracts with other parties, including the gas suppliers. 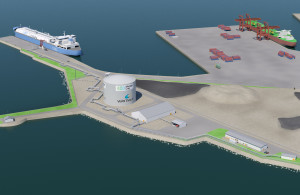 The main user of the natural gas from the terminal will be the Outokumpu Tornio steel mill, but industries, mines, and other potential gas consumers in the region will also be served. The terminal may also eventually supply LNG to ships, such as the new icebreaker planned to operate in the Tornio and Bay of Bothnia region.

“The Tornio Manga LNG terminal is a long-term infrastructure investment programme. The beneficiaries include shipping and road transportation companies, power and heat utilities, as well as other industrial and mining companies in northern Europe. We appreciate Wärtsilä’s participation as a valuable partner in this project with special value-adding capabilities in this field,” says Pekka Erkkilä, Chairman of the Board, Manga LNG Oy.

“This is a large and extremely important project, and we see the selection of Wärtsilä Power Plants to engineer, supply, and construct the new LNG receiving terminal as an acknowledgement of our expertise and experience in engineering, procurement and construction (EPC) project execution, in LNG handling systems, and in the use of LNG as fuels. The terminal will enable this clean and competitively priced fuel to be available for industrial consumers in the Bay of Bothnia region, and will further enhance the growing acceptance of LNG as a marine fuel,” says Vesa Riihimäki, President, Wärtsilä Power Plants.