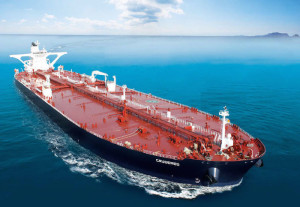 VLCC floating storage has been an important feature of our industry in recent years. However, in these past few months, it seems that the market dynamics don’t seem to favor this development.

In its latest weekly report, shipbroker Gibson said that “while Iranian nuclear sanctions were in place, a significant portion of NITC’s VLCC fleet was used for storage of Iranian crude and condensate. From early 2015, the tanker industry also witnessed a gradual increase in VLCCs employed for non-Iranian floating storage. This was on the back of strong gains in the Middle East crude production in 2015/2016, which translated into a major build in land based inventories, supporting demand for tanker storage. Finally, the number of VLCCs absent from the trading market was further boosted by tonnage in other non-trading activities, primarily fuel oil storage around the Singapore area”. 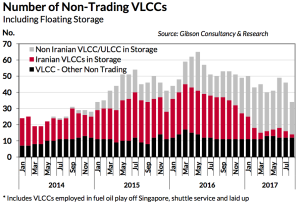 According to Gibson, “the chart below shows the count of non-trading VLCCs on a monthly basis since January 2014, with the vast majority of these units involved in floating storage. The number of tankers absent from trading operations peaked in 2016, fluctuating between 50 to 60 units for most of the year. The international agreement reached about the Iranian nuclear developments translated into a rapid release of the NITC tankers from floating storage in late 2016/early 2017. However, this was to a large extent offset by robust demand for non-Iranian storage, aided by declining freight rates and persistently high land based oil inventories through the first half of 2017. A further drop in floating storage was seen last month, as the OPEC led production cuts have finally started to bite. The total number of non-trading units fell to just 34 by the end of August, the lowest level since December 2014. The number of VLCCs in non-Iranian floating storage declined by 10, while a further 2 VLCCs were released from the Iranian floating storage”.

The shipbroker raised the question of whether the latest developments the beginning of the end for the VLCC floating storage? “If OPEC proves successful in its effort to rebalance the oil markets and bring down the inventory levels, further release of tankers from storage duties is likely. However, the ongoing rebound in US crude output tempers with the rebalancing efforts. At the same time, stability issues in Nigeria and Libya, where production has increased notably from the lows seen in 2016, explains little enthusiasm of these countries to apply any restraint to their output levels.

Inevitably. the decline in VLCC floating storage is a bearish development from an owners’ perspective as it boosts the trading fleet. However, many units that have been recently released from floating storage, or are still on storage, are of vintage age and it may prove difficult for them to find trading opportunities. In fact, according to AIS tracking, some of the aging ladies that came off storage in recent months are not currently trading and are sitting empty (for weeks in some cases). Whether they will find further storage employment, resume trading or simply leave the market for good – that remains to be seen”, Gibson concluded.

Meanwhile, in the crude tanker market this week, Gibson said that is was a very busy week for VLCC’s in the Middle East, “but due to the over-abundance of tonnage available Owners have been unable to wrestle away any bargaining power from Charterers. Levels remain in the low ws 40’s basis min 270,000mt for a voyage East and with voyages to the West quite a rarity these days, the last done here in fact dropped to the lowest levels seen this year so far to 280,000mt x ws18 via Suez/Suez. A horrendous week for Suezmax Owners has seen the tonnage list lengthen and rates soften to ws 65 for India discharge and ws 26.5 for European destinations. Another healthy level of Aframax activity in the AG this week is slowly helping to clear the backlog of tonnage that has been building. At a similar time, there has been a slight improvement in activity in the Indonesia region which has slowed the flow of tonnage ballasting back to the AG. Last done levels from the AG to the East are 80,000mt x ws 90, but Owners remain optimistic in securing some premiums next week”, Gibson concluded.