US Ports Preparing for Post-Panamax Ships? 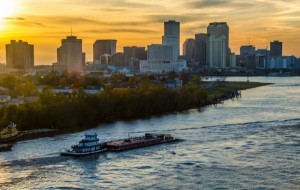 The Army Corps of engineers has said that the Mississippi River should be dredged to let three southeast Louisiana ports accept the enormous cargo ships built to take advantage of the Panama Canal‘s expansion. This was originally reported by New Orleans City Business.

Ports across the United States have been attempting to excavate their channels in an effort to make way for the massive, post-Panamax ships that are predicted to have a major impact on the global shipping industry. It is believed that despite plans and a general enthusiasm for deepening, many ports are still awaiting federal approval for dredging projects. The Port of Charleston in South Carolina is one port to have received approval though, and they have been granted funding to deepen their port to 52 feet. This will allow access for the enormous post-Panamax ships expected to pass through in the future.

The proposed dredging plan and environmental assessment released by the corps estimates that the Mississippi River project would bring $96.8 million in annual revenue to the U.S. economy. The entire report can be found at Nola.com.

As part of the deal, the Louisiana Department of Transportation and Development would pay USD $45.7 million of the predicted $88.9 million cost. The corps is planning to use some of the dredged-up silt to create more than 1,460 acres of new wetlands. “The creation of marsh would provide an increase in fish and wildlife habitat including nesting habitat for water fowl and nursery habitat for fish,” the report said.

The corps turned down plans that would have opened the Port of Baton Rouge to deeper-draft ships. The current proposal would allow such access at the ports of Plaquemines, New Orleans and South Louisiana.

The increased depth would reduce the need to load some ships with less cargo than they can hold, or to unload part of their cargo before they enter the mouth of the river.