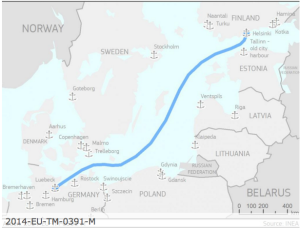 This Action is embedded in the development of the Trans-European Transport Network (TEN-T) with an emphasis on increased efficiency and sustainability of transport, infrastructure use, as well as freight and passenger handling operations on the maritime link Helsinki-Lübeck. The MoS link is part of the Scandinavian-Mediterranean TEN-T core network corridor. It is also relevant for the North Sea-Baltic corridor, which is inter-linked to the Scandinavian-Mediterranean corridor at the transfer node of Hannover (Germany).

The Action has two objectives. On one hand, to increase the productivity and capacity of the MoS link and service related terminal operations in the TEN-T core ports of Lübeck-Travemünde in Germany and Helsinki-Vuosaari in Finland. On the other hand, to reduce the environmental impact of ship operations.

To this end, the action will include the design and construction of an embarkation facility in the Port of Helsinki-Vuosaari, as well as the improvements in the terminal operation of Lübeck-Travemünde. It will also include the installation of open-loop hybrid ready wet scrubber systems and new blades and rudder systems on board of the four very large RoPax ships named “Nordlink”, “Finnstar”, “Finnmaid” and “Finnlady”.

This will contribute to the reduction of sulphur oxide emissions in the Baltic Sea, as requested by Annex VI of the International Convention for the Prevention of Pollution from Ships (MARPOL) and the EU Directive 2012/33/EU. By reducing the green-house gas emissions of the vessel operations the action significantly contributes to the Union’s CO2 emissions targets.