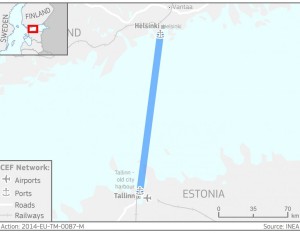 This Action is the second stage of a global project aiming at fostering greater cross-border cooperation between Finland and Estonia through developing and upgrading the MoS link between the ports of Helsinki and Tallinn and thus connecting the North Sea–Baltic to the ScandinavianMediterranean core network corridors. It follows the previous TEN-T funded Action TWIN-PORT (2012-EU-21011-P). In the Port of Helsinki, the Action will include works to construct a new fastflow terminal with passenger skyways and passenger gangways, upper deck ramps to the berths on both sides of the terminal, gate operations with check-in automation and traffic connections to the terminal. In the Port of Tallinn, the Action includes works for the construction of a microtunnel in the Sadama street, an extension of terminal D, reconstruction of access to terminal A, the building of a connection between these two terminals as well as a Hazard and Operability Analysis HAZOP study for the Old City Harbour. In addition, environmental and efficiency solution investments for a new generation RoPax ferry will be co-financed which will operate on this link. These investments will significantly advance the Global Project of removing port bottlenecks, optimise port operations and further increase RoPax capacity by commissioning a new generation LNG RoPax vessel.