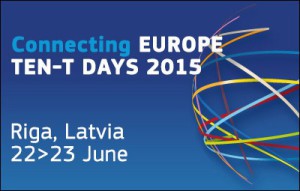 On the 22nd and 23rd June, 12 Transport Ministers of the European Union, along with CEOs and more than 1000 transport stakeholders joined in Riga to attend the transport conferences on Trans-European Transport Networks (TEN-T), organised by Cecoforma on behalf of the European Commission and in cooperation with the Latvian Presidency. This edition of the TEN-T Days focuses on the challenges faced by the new TEN-T in attracting innovative funding solutions in order to close the gaps between Member States’ transport networks.

Besides the technical and political sessions of the conferences that took place within those unmissable days in Latvia, the TEN-T Days Exhibition featured also an incredible indoor showcase of over 40 different TEN-T projects and initiatives, all helping to improve European transport infrastructure. But it is not just about creating new material links: when it comes to Motorways of the Sea, we can say that effectively developing the maritime dimension of the TEN-T is also about knowledge spreading and the harmonization of proper training to address the challenges this branch of the EU transport system is facing nowadays. 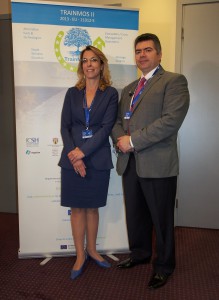 With this in mind, Regione Liguria was one of the confirmed organizations and bodies for the indoor exhibition and within its stand it seized the day to promote also the TrainMoS II Project, the well-known initiative co-financed by the EC under the TEN-T 2013 multi-annual work programme that represents a unique example of training financially supported by the Commission and covering a wide host of MoS-related topics.

Several among representatives of port communities, shipowners, transport Ministers and other sector’s key stakeholders have been provided with the information material produced to spread the word and get as disseminated as possible the project together with its promising outcomes. 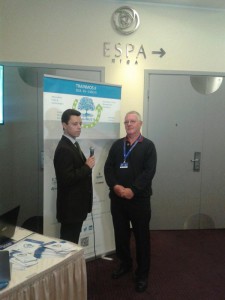 Apart from the support of many of the aboves, the TrainMoS II Project has cashed also the approval of the MoS Coordinator Mr Brian Simpson, who recalling the human dimension of Motorways of the Sea said: “Training is important because within MoS we have a strong human element component, and therefore we look at many projects in order to be able to give people that are travelling by sea the confidence that is safe to do so.” Then, commenting on the TrainMoS II training provision, he added: “the curriculum we got within this Project is a wide one based on all the aspects of maritime transport and that is good for the Industry as a whole. I like the schemes were we can learn from one another in order to get maritime onshore and offshore as safe as possible.”

Finally, the Exhibition was also an opportunity for taking stock of the Project’s development with most of the partners gathering for a meeting in a nearby venue at the end of the first day.

Now, further galvanized by the received support during this key event, the TrainMoS II Consortium looks ahead and invites all those interested to follow the first cornerstone of the free of charge training provision on “Evacuation and crisis management”, a course targeting professionals and delivered by the University of Strathclyde between the 1st and the 3rd of July.