TrainMoS II Final Event: that’s how it went, looking in the wake of the successful Project while charting a new route ahead 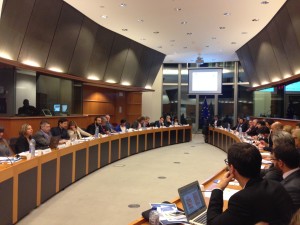 On the 9th of December 2015, Project partners from UK, Italy, Greece, Portugal and Spain, highest representatives of the European Commission, Members of the European Parliament and delegates of maritime Industry’s associations at European and National level gathered at the European Parliament in Brussels to celebrate the conclusion and successful achievements of TrainMoS II (2013-EU-21012-S), the well-known Project co-financed by the European Union under the TEN-T 2013 multi-annual Call for Proposal, born to support the expansion of knowledge on MoS-related issues taking into account emerging needs and challenges of the multi-modal transport system.

Although other projects on maritime training found support under different financial frameworks such as the 7FP, TrainMoS is the first case of such an initiative that has been co-funded under the TEN-T umbrella, providing a unique example of collaboration among private an public entities. The Consortium, made up by six Universities (University of Strathclyde that led the way, Universidad Politécnica de Madrid, Faculdade de Ciencias Sociais e Humanas/Universidade Nova de Lisboa, Università degli Studi di Genova, National Technical University of Athens and University of Piraeus), together with the joint effort of CIMNE, Circle, Magellan and Regione Liguria, have met the expectations and wanted to say it proudly.
“TrainMoS II is an evolution of the EC investments made on the human element which started whith TrainMoS few years ago”, recalled Project coordinator Dr. Evangelos Boulougouris (University of Strathclyde), who underlining the added value of the Action and remarking that there will be constant need for similar initiatives in the future, enlisted the impressive goals reached along the course of the project, which are hereby recapped in a nutshell: a unique post-graduate multi-disciplinary and multi-source programme covering a host of subjects impossible to find within current Academic frameworks; around 50 post-graduate students following free of charge the whole path and awarding credits from their Universities for that; six professionals courses attended by tens of employees within various Industry’s sub-sectors; 150 GB of lectures video recordings made available on an ad hoc Learning Management System for further consultation; thousands of slides of original material produced to deliver high quality lessons; new functionalities for existing e-learning solutions and new IT tools developed. In other words, restituting attractiveness to maritime education and training.

And all that within a network among centres of excellence all around Europe and building a strong link between Universities and the Industry, thanks to the engagement of thousands of stakeholders that actively contributed ensuring training provision’s alignment to market needs and consolidating a long lasting platform, an open channel of constant dialogue throughout the whole Project’s lifecycle and beyond.
But the event, which was organized by the Brussels Office of Regione Liguria and that was kindly hosted by Italian MEP Sergio Cofferati, was far more than just a focus on TrainMoS II project as a forerunner.
Following a project-dedicated panel, it was in fact the time for the Institutional session, that resulted to be like a sort of corollary, a short extension of the exchange of views that the MoS Coordinator Brian Simpson had in July with the EP TRAN Committee, where the human element resulted to be a hot topic of discussion.
“Human element and training is one of my three priorities”, said Mr Simpson, “and I hope you’ll be carry on projects such as this”, added addressing the Consortium. This also because Mr Simpson is aiming at gaining more financial support, at least the same of the other 10 European Coordinators within the TEN-T; and in this regard he said that “projects like TrainMoS II help MoS to progress in this direction and to make this Horizontal Priority on an equal basis with all the other Corridors”.
Three MEPs then in turn expressed their views about the link between MoS’ human capital, Europe’s growth and Parliament’s priorities.
UK MEP Theresa Griffin recalled the maritime one is a sector rich in SEMs that will be key for national and regional growth, and since we know that good education and continuous training and development improve people’s quality of work and life, we need to be sure that training for this sector is Industry and demand led, also with a view at guaranteeing young people better chance to have well paid jobs.
Spanish MEP Inès Ayala Sender, who has been rapporteur on the Connecting Europe Facility Regulation, remarked that after years and years of implementing legislations for the transport sector we are now in the right moment for taking into account the human element as a key issue, and as the pillar of a comprehensive social package where the maritime transport sector is the boost for everybody’s quality of life enhancement.
A key issue that nonetheless deserves more financial support, rightly recalled the MEP making assist to Mrs Simpson, because from the Marco Polo Programme (which without doubt was a good first attempt of addressing the human element and shifting goods from land to sea), the first lesson learned was that money allocated were not enough. “And you”, added Mrs Sender addressing MoS Coordinator “have all the support to push for more resources”.
This also because as Portuguese MEP Clàudia Monteiro de Aguiar recalled, there is shortage and mismatch of skills in several sub-sectors, not only when talking about alternative fuels, safety and security aspects but also considering that most of them face challenges in the ICT domain; and the Blue Economy Strategy cannot achieve its potential without highly specialized personnel able to managing faster and faster logistic processes.

But TrainMoS global approach’s impact goes even beyond this, since as the Madeira-born MEP highlighted, this kind of instruments have the power to indirectly improving accessibility and cohesion of the ultra-peripheral regions and islands.
Then Mr Josè Anselmo, principal Administrator of TEN-T Policy – Motorways of the Sea at DG MOVE, underlined that the common threat of all the 80 and more projects under MoS is the fact that we have the human element, we have European know-how and we need to back up, aggregate and export it to create a market for it even outside Union’s boundaries.

“We are very happy to see that TrainMoS has evolved to the results that we have now, and you – said Mr Anselmo addressing the Consortium – are the first example at European level with a polycentric nature”, away from the slogans of single Universities claiming their supremacy. Then, recalling how the TrainMoS Global Project succeeded in providing a virtuous example of how to tackle global challenges clustering local knowledge, he added “you were the reason that led us to integrate the TEN-T regulation (and this was the first time ever), with reference to the human element as one of the key developers for the network. You demonstrated that it worth it.”
It was then the time for the Industry side panel, where from SEAEUROPE to ESPO and the Port Community of Leixões, the focus was put on the need for proper training and the new initiatives addressing this topic, from the launch of a European skill council on maritime technologies to the continuous, to the ESPO’s Sectorial Social Dialogue Committee for the Port Sector and the main challenges the associate members are facing.
And as it was for the first TrainMoS, the event was closed by some of the most promising attendees of the Project’s training provision. Thus, delivering very positive feedbacks, Thomas Lamberti and Andrea D’Urso (from Italy), Èlio Figuereido (Portugal) and Ioanna Pavlopoulou (Greece), expressed their views on to which extent the TrainMoS II programme did represent a strong attractive for them at first, which was the added value of the by distance model of lectures’ attendance and that of the European dimension of the initiative, which was the general opinion about the courses, to which extent were the topics addressed useful to them, which were their expectations in terms of job opportunities, and how the close contact with some of the most important key players within the sector helped in building a good basis for a personal network.
And what better way for the TrainMoS II Team to look forward charting new routes then aspiring at gaining a renovate financial support? “We have a new Call now open: make use of it!”, recommended Mr Anselmo, adding “I believe that you cannot stop here: we have to continue clustering and sharing knowledge without migrating to do it.”
A message that matches the suggestion of MEP Sender, who underlined this is a call that could be seized not just counting on the means provided under the CEF or ESIF, but also looking at other frameworks such as the Youth Initiative, because it needs the know how and the experience that the TrainMoS II Consortium demonstrated to have, in order to be used the right way.
Now, we do not know yet what’s coming next, but we could say that with this event everyone got his Christmas gift in advance: the TrainMoS II consortium cashed the support of EU Institutions, the EC gave once more the evidence that its financial support to boost MoS development was well placed, MEPs learned more about a successful Project and a solid partnership that could make the difference in contributing to address the priorities they are working on, and, last but not least, TrainMoS II students had the news that the most valuable among them will be offered an internship at some of the most relevant Organizations within the sector.

And here some pictures of the event 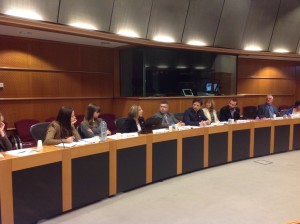 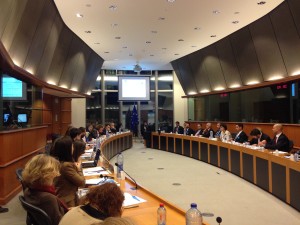 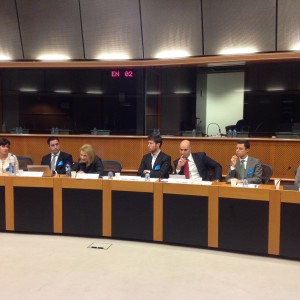 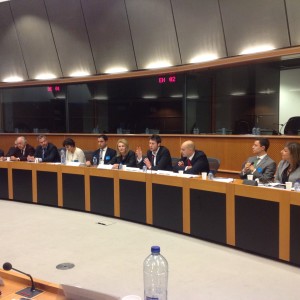