The Southern Gateway to Europe, Ports of Genova, guarantee vessel and cargo handling for providing of essential goods

The #Ports of #Genoa, #Pra’, #Savona and #Vado Ligure guarantee all vessel and cargo handling operations in compliance with the latest Italian Prime Ministerial emergency measures which provides for the ongoing production of essential goods for the nation.

The Port Authority President underlines the huge efforts and commitment made by the Port Authority, working closely together with the entire Ports of Genoa shipping community – comprising terminal operators, stevedores, freight forwarders, trade unions, road-haulers, and logistic service providers -, to ensure that the Ports of Genoa remain open to serve the leading industrial and manufacturing centres of Northern Italy.

To date, the Ports of Genoa shipping community has been successful in its efforts to keep the Ports of Genova, Pra’, Savona and Vado Ligure open for business. However, in financial terms, the repercussions on the economy are set to be extensive: for instance, the 3.5 billion euros generated by VAT on imports into the Ports of Genoa, Italy’s premier port, could result in a reduction of 1 billion euros for the Italian state in view of the expected 20-30% slowdown in trade.

million euros generated by VAT on imports into the Ports of Genoa, Italy’s premier port, could result in a reduction of 1 billion euros for the Italian state in view of the expected 20-30% slowdown in trade. 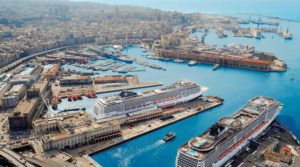 FOUR PORTS, ONE PORT AUTHORITY
Genoa, Pra’, Savona and Vado Ligure, the ports of the Western Ligurian Sea – grouped together under the banner Ports of Genoa – rank as Italy’s pre-eminent port range in terms of total throughput, product diversity and economic output. Since 2017 the ports have been governed by a single Port Authority which is committed to offering the highest standards of service to operators and clients alike, improving efficiency by simplifying administrative procedures and setting out terms and conditions of port redevelopment to enhance port competitiveness.

IN THE HEART OF EUROPE
Strategically located in the northernmost point of the Mediterranean Sea at the heart of Europe, easily accessible overland across fast road and rail connections and by sea across the ultra-large container vessels which can dock in the ports’ natural deepwater, the Ports of Genoa are equipped to consolidate their leadership as the premier Mediterranean gateway to the major consumer centres in Europe. The industrial heartland of Europe sits within a 600-km range of the ports: Switzerland, Bavaria, Baden-Wurttemberg, Austria.

AN EXTENSIVE LINER SERVICE NETWORK ACROSS THE WORLD
With over 150 deep-sea, short-sea, feeder and ro/ro liner services, the Ports of Genoa are connected to over 500 ports worldwide.
The port basins offer direct access to the open sea, natural deepwater, minimal tidal range, favourable marine conditions: everything is in place to accommodate safely the ultra-large ships of the container, bulk and passenger handling sectors.

EFFICIENT LAND-SEA CONNECTIONS
The Ports of Genoa benefit from a strategic position with easy access to/from the major inland routes, both by road across the international motorway network and by rail to major industrial destinations, including direct on-terminal connections along the Rhine-Alpine Corridor, with capacity upgrades due to be completed soon. In addition, the Port Authority is committed to an intensive use and expansion of its Port Community System to ensure the smooth exchange of electronic documents, amongst all parties concerned in the logistics supply chain, to reduce dwelling and transit times in the ports.

ONE OF THE MED’S TOP PASSENGER PORTS
The ports also rank amongst the Mediterranean’s leading passenger hubs: homeport to the world’s major
cruise liners, transit ports featuring a wide selection of attractive destinations along the glamorous Italian
Riviera, state-of-the-art ferry terminals with scheduled services to the major Italian islands, Sardinia and
Sicily, to Corsica, Spain, Malta and North Africa. Every year over 4 million passengers choose the Ports of
Genoa, Savona and Vado as embarkation points for their holidays.

TOP CARE FOR FREIGHT
The Ports of Genoa are equipped to offer a full range of high-quality services, from logistic activities (handling, storage, distribution…) to IT procedures (Customs clearance, data exchange, on-line services). The Genoa Port Community System, which interconnects the port public administrations, operators and customers (over 1500 companies involved), is the most advanced in Italy and in 2017 it was integrated with the Italian Digital Logistic Platform, improving the efficiency in handling high volumes of traffic within the global supply chains.

Through the GOALS project (Ports of Genoa Logistics Quality Standard) the Port Community is now ready to move a new step forward, to guarantee customers the integrated performance of the port, establishing efficiency and transparency benchmarks for the whole port logistics chain service.

IMPROVING INTERMODALITY TO SWITZERLAND AND SOUTHERN GERMANY
Cooperation among port terminals, railways and transport operators can lead to the introduction of new intermodal services from the Ports of Genoa to the European market. Shoreside, the use of the Ports of Genoa as opposed to Rotterdam (when both are first port of call along the route) saves at least 5 days’ sailing from Asia.
Whilst landside, rail connections to Switzerland and South Germany are becoming a reality. The first direct railway service connects the PSA terminal to Basel (Frekendorf) since October 2018. Meanwhile, significant improvement works of the last mile rail links and the adoption of innovation technology to optimize railway operations (terminal railway-gate automation, rail traffic management systems, IT integration of the railway transport chain from port to inland destinations) are on the way, contributing to a progressive upgrading of the port railway service within 2021. Alp-Transit and the completion of the southern part of the Rhine-Alpine corridor (2023) will further improve transit time and cost to European destinations, allowing to forward EU standard (740 m) trains directly from the Ports of Genoa.