The second MoS Forum: a stimulating discussion about the Logistic 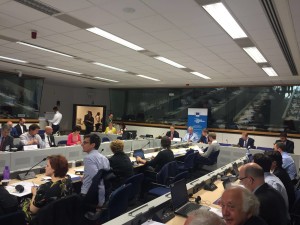 The 17th of May, in Brussels, took place the Second MoS Forum with focus on the integration of the maritime transport in the logistic chain. The relevant event has been organized by Mr. Brian Simpson OBE, European Coordinator for Motorways of the Sea at the presence of relevant stakeholders, coming from the industry, from the university and from the policy makers’ environment.

The full day event saw the involvement of almost 100 invited participants, among those a selected list of speakers illustrated their views on some hot topics strictly linked to the concept of integration of the maritime transport in the logistic chain: the Mos links between ports, with specific reference to the Dover-Calais connection, the link between Frederikshaven Gothenburg, the Kvarken Multimodal link and the AdriaMos project. The Corridor integration topic was approached under different aspects and reflected in some past and current MoS projects, such as WiderMos, Fresh food Corridors and Atlantis. The ICT prospective was also represented through the experience of the Swedish Maritime Administration, with the Anna project, of the Port Authority of Leixoes and its interoperable system for integration in the multimodal logistic chain and of the B2MoS project. To conclude some speeches considered the concept of MoS beyond the EU MoS, specially looking at peripheral regions and Extra EU countries.

The second MoS Forum, falling within the activities of the MoS Work Plan, had the aim of collecting relevant and specific inputs from the speakers and from the selected list of participants that were required to provide feed backs and comments that could potentially be used to build up the Detailed Implementation Plan that Mr. Brian Simpson OBE will present to the European Parliament the next 15th of June.