The puzzle of shipping alliances in April 2017

Given the dynamics of expansion strategies among carriers, maritime alliances have been increasing these last years and nowadays the world liner fleet is dominated by few of them.

To better understand this and the puzzle of shipping alliances, we are analyzing its evolution and its effects on the current market situation.
In 1992, the shipping market was driven by thirty shipping companies which represented around 63% of the total fleet[2]. Carriers started to share capacity on assets as soon as deregulation began affecting all modes of transportation in order to manage various trades. Since then, from a strategic vision, and in order to save cost, enhance economies of scale, get better competitive position and to be protected against the threats of the industry, alliances, mergers and acquisitions have been adopted as tools to this end. In 1998, there were 6 alliances, which represented 50% of the worldwide fleet (in TEUs). Between 2000 and 2010, the combined capacity of the fleet capacity of the top 30 carriers has been multiplied by 2, reaching 10.81 Mteu. At this time, there were 3 main alliances, Grand Alliance (NYK, Hapag-Lloyd and OOCL), CKYH Alliance (Cosco, K Line, Yang Ming and Hanjin) and New World Alliance (APL, MOL and HMM) while the biggest actors in the sector, Maersk, MSC and CMA CGM, were still on their own. The three alliances together represented almost 50% of the fleet capacity thanks to past acquisitions. However, in 2014, the fusion of CSAV and Hapag Lloyd was driven by losses and seeking external resources. In 2014, the P3 alliance was proposed; it was composed of CMA CGM, Maersk and MSC but was rejected under China’s merger control rules even though the European Commission had not officially objected to it. In 2015, Zim remained the only major carrier which had not joined any alliance and its business was profitable. This was accomplished mostly through its partnerships on various routes while managing to avoid the most important trades where the alliances operate, such as Asia-North Europe[3].  By April 2017, three main alliances, The Alliance, Ocean Alliance and H2M, with a total fleet of 15.862.743 TEUs[4] are expected to operate, representing at least 76.6% of the operational market. Meanwhile, OCEAN Alliance is still in the process of formation and the alliance formed by CMA-CGM, China COSCO, Evergreen and OOCL is expected to begin operating by April 2017. The Alliance will be effective at the same time and integrated by Hapag-Lloyd which has officially merged with UASC, Hanjin, MOL, NYK line and Yang Ming. The two main companies, Maersk and MSC will constitute the 2M alliance and, recently, for financial reasons, Hyundai Merchant Marine has also signed an agreement to form H2M alliance. 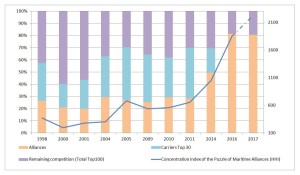 Source: Authors, based on annual fleet supply from UNCTAD and Alphaliner top 100
Notes:
1. Remaining competition represents the carriers from the top 100 fleet capacity not included in alliances and top 30
2. Carrier’s top 30 represents the main carriers considering fleet capacity
3. Concentration Index of the Puzzle of Maritime Alliances (HHI) refers to the alliances listed in figure 1. N represents each group.
Until 2001, the top 30 carriers and alliances represented less than 50% of the operational market (according worldwide fleet capacity). By 2011, through mergers and acquisitions, we observed a net shift and an exponential growth of the concentration. While total fleet capacity was increasing, the offer was managed by fewer and fewer groups. In order to calculate concentration, we have used the Herfindahl-Hirschman Index (HHI) which illustrates well this phenomenon. In this case, to calculate a tendency, we have considered all carriers and alliances displayed above. Until 2014 offer was fairly distributed in the market. Indeed, a market is qualified as moderately concentrated when the HHI is between 1,500 and 2,500 points. Moreover, this index increases as the numbers of companies in the market are decreasing, for example, due to mergers and acquisitions. In this regard, this year two new associations were formed: COSCO merged with CSCL and CMA CGM acquired APL (NOL).
We have reached a new era in global transportation. As Drewry has identified, the market is weak, freight rates are decreasing and there is a fleet overcapacity. As we observe from the HHI, there is a tendency for concentration; even if the index is still moderate. With a decreasing number of companies integrating into fewer but larger alliances, the index will raise exponentially.