The evolution of Terminal automation, how the technologies impact of terminal performance 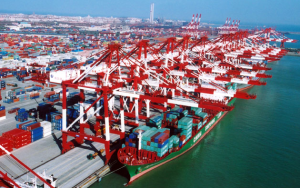 The world of shipping is always in evolution, every year the volume of traffic shipped is always larger than the year before.

The market’s trend is oriented to the construction  of Mega-Ship: at the end of 2016, the world’s largest ports were capable of serving 20,000 TEU mega ships. The big problem related to the arrival of Mega-ship is the extreme-high volume of goods, that must be processed in a relative short-time. The critical issues  concernes how to develop an efficient system able to process all the products in the shortest possible time. Moreover, maintaining a high level of safe and productive standard.

Focusing about the level of Automation, the statistics evidence is thatonly 3% of maritime terminals are fully automated, with a further 7-13% partially automated. So, at best, 16% of terminals have made real investments in automation technologies.

The main topics are evident: the level of Terminals technologies and in particular the AI (Artificial Intelligence). The key point has been the development of new algorithm  which have changed the way of thinking the industry and the relative internal process. The Terminals are not excluded by the use of these algorithms. Another fundamental tool is  IoT: smart devices able to communicate mutually these functions have increased the volume of Big Data saved in the principal database, making easier the creation of new models to decrease possible inefficiency.

These set  of factors have made available numerous solutions with the purpose of automate the different terminal operations.

The biggest example of terminal automation should be considerate the Chinese Port of Quingao. The main feature is  the full level of automation present in the different sections of the Terminal.  Some technical articles have spoken of a clear example of “Ghost Terminal”, where the only employer are present in the back-office area, with the purpose of monitoring the activities and solve eventual issues.

Other Big Ports around the world have begun this automation: a clear example is the port of Los Angeles and Long Beach where the level of automation is direct to the green achievements. The Zero Emission result with full driverless handling truck is a concrete goal realized by  both the ports, thank also to the important role played by the State of California with its financing.

The big question is, how the level of automatization will impact the employment market, and how the maritime ports cluster will be influenced by a so important decrease of level of workers inside the port, and particularly in the case of urban-ports. This arguments should be analyzed with more attention.

Source: On the Mos Way Staff