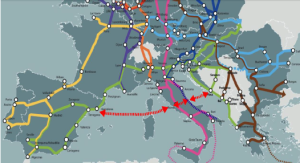 Last October 2nd at the Generalitat of Catalonia’s headquarters–Ministry of Land and Sustainability– General Direction of Transports and Mobility of Barcelona, a meeting was called to present to the General Director, Mr Pere Padrosa i Pierre, a proposal regarding “IL NUOVO CORRIDOIO MEDITERRANEO” (The new Mediterranean corridor), as it is illustrated in the homonymous book by Antonio Nervegna and Euclide Di Pretoro.

Other representatives of the Catalan government took part in the meeting: Mr Josep Maria Fortuny, Vice-Director General of Transport Order and Sector Development and Ms Laia Mercadé Ruiz, Technical Coordinator of Infrastructures and Mobility and Responsible of the Mediterranean Corridor. To represent the Port of Barcelona, Mr Carles Rúa, Responsible for Strategy Projects; for Centre-North Tyrrhenian Sea Port Authority, Mr Giovanni Marinucci, responsible for External Relations. The authors of the book, Nervegna and Di Pretoro, were accompanied by Mr Nicola D’Arcangelo and Ms Emanuela Di Luca, respectively President and Coordinator of Polo Inoltra, Innovazione logistica & trasporti, a business association located in the Abruzzi and by Gianluca De Santis, responsible for Promotion at Chamber of Commerce of Chieti (Abruzzi). Eduard Rodés, director of the Escola Europea, facilitated the meeting at the Catalan government, accompanied by senior consultant in logistics and transports and teacher of the Escola Europea, Andrea Campagna, professor and researcher at La Sapienza University in Rome.

With the support of Polo Inoltra and of the port authorities of Barcelona and of the Centre-North Tyrrhenian Sea, Nervegna and Di Pretoro, explained their proposal having as main aim the European acknowledgement of a branch of the Mediterranean Corridor from Barcelona (Catalonia) to Ploce (Croatia) through Lazio and Abruzzi regions. The branch’s critical point is the inclusion of the maritime routes connecting Barcelona and Civitavecchia (Rome) ports and, on the Adriatic coasts, Ortona and Ploce ports. The road stretch connecting the maritime routes is the one cutting transversally the Lazio and Abruzzi regions.

The Escola Europea de Short Sea Shipping –2e3s.eu– participates in this project as mediator. Barcelona and Centre-North Tyrrhenian Sea port authorities are two of the Escola’s founders and the SSS route connecting the ports of Barcelona and Civitavecchia has been the stage of hundreds of courses offered by the Escola aboard ro-pax ferries.

The meeting was concluded by the Catalan General Director, who declared to be fully in favour of the proposal. He invited the promotors to carry on the programmed initiatives to involve the other parts interested in the project, especially the Italian part, to boost the project’s development and to gather the reference political representatives and stakeholders (both national and European) for the Congress, promoted by the Centre-North Tyrrhenian Sea port system authority, scheduled for November in Civitavecchia.