The Belt and Road Initiative: China’s way for globalisation

Belt and Road Initiative (BRI) is a Chinese multi-layered economic, and geopolitical agenda that by which the two ends of Eurasia, as well as Africa and Oceania, are being more closely connected along two routes–one overland and one maritime. The Chinese President Xi Jinping initially proposed it in 2013. Later in 2015, the People Republic of China issued an action plan for realizing the initiative.

Formally, One Belt One Road focuses on five main areas of cooperation between involved countries:

However, infrastructure such as highways and roads, railways, seaports, energy systems and pipelines has been at the centre of attention within this initiative. The BRI brings a view of a US$1.3 trillion investment program, mostly by China, to create a network of infrastructure. It aimed to boost economic inter-connectivity and assists development across Eurasia, East Africa among more than 60 partner countries.

The new Silk Way imagines the establishment of six key economic cooperation corridors and some crucial maritime pivot points across Eurasia. In short, on land, the Initiative planned to build a new Eurasian land bridge and develop five economic corridors of China-Central Asia-West Asia; China-Mongolia-Russia; the China-Indochina peninsula; China-Pakistan; and Bangladesh-China-India-Myanmar. On the seas, the BRI will enhance jointly built, secure, smooth, and energy efficient transport routes connecting major seaports along the belt and road. Very recently, Polar Silk Road also introduced as a route, in addition to the Maritime Silk Road. Altogether, they form the “belt” and “road”. (See Table.1).

The Silk Road Economic Belt’s overland infrastructure covers the Eurasia Land via the above-mentioned five corridors, empowered with high-speed railways and hydrocarbon pipeline networks. The ‘Belt’ corridor extends from the west of China through Central Asia to Europe. It targeted the integration of the Eurasian landmass into an interrelated economic area. 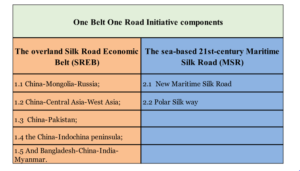 The Maritime Silk Road is concentrated on developing some ports. For the maritime ‘Road’, the seaports and hubs across the Indo-Pacific are crucial as they act to connect to land-based transportation routes. Development of port facilities across the Indian ocean in  Indonesia, Bangladesh, Sri Lanka,  Pakistan, Kenya, Tanzania, Oman and Djibouti are all according to the plan to provide maritime access for China. In the EU end, the route connects to Greek port of Piraeus which owned by COSCO the Chinese Shipping Group. It facilitates China’s  access to the European markets.

China claims that the initiative can further integrate China into the rest of the world while allowing poorer economic parts of the country to gain the benefits of its opening-up policy. In 2016, the China Daily reported that in line with the new BRI Initiative, China has established 75 overseas economic and trade cooperation zones in 35 countries as part. However, the new silk ways are still immature and strive for external endorsement and support.

To support the Initiative financially, China has established the multilateral Asian Infrastructure Investment Bank (AIIB) and a further  $40 billion Fund for Silk Road. Therefore, the major incentives for BRI infrastructure projects, yet coming from the huge funding of China’s big state-owned investment banks. Not only the access to China’s funds attracted many partners, but also the minimal political conditionalities that come with Chinese finance, in comparison to financing on offer from the World Bank, the US government or other sources such as the Asian Development Bank.

There is a big discussion around this Chinese initiative around the world as some countries look at it as an opportunity to strengthen their transport and logistics infrastructure in order to be more efficiently integrated into the global supply chain.  Meanwhile, the BRI suggests China a way to effectively use its massive $3 trillion capital reserves to internationalise its national currency and to assist the slowed-down economy with a higher rate of growth. Furthermore, the initiative serves to reduce the problems that China has recently faced from the industrial over-capacity. The initiative offers China the utilization of its vast idle industrial capacity and also to secure the jobs in fundamental industries such as cement and steel.

some people see this initiative as a threat which helps China to dominate Eurasia economically and politically.  Supporters believe that it allows new infrastructure and economic support to weak economies and developing countries. Critics say that it enables Chinese economy to be dominant over the countries along these routes. One Belt One Road provides a global context for China’s economy to prove itself as a superpower. On the opposite, China has frequently claimed that the new Silk way initiative has a co-operative nature along with an objective “win-win outcomes” for all states.

The opponents claim that the China’s gain from the initiative is much higher than the involved partners. It is stated that the initiative serves China to secure its Energy policy by diversifying the energy sources through greater access to Russian and Iranian oil and gas. Within the initiative framework, it is planned by to be achieved by linking with pipeline networks from Russia and Central Asia. Furthermore, two different pipelines from Gwadar port in Pakistan and from Myanmar to China also can diversify its transportation routes for maritime energy supplies. It significantly reduces China’s dependence on maritime choke-points in the Strait of Malacca and the South China Sea.

However, the Chinses officials and supporters have many times described the Belt and Road Forum for International Co-operation and collaboration rather than competition. The claim that the initiatives will improve international trade and transport in terms of “peacefull co-operation”, “openness and inclusiveness”, and “mutual learning and benefit”. The claim that investments in hydrocarbon pipelines within the scope of BRI will help to moveChina to the post-carbon economy, along with its commitment to the Paris Agreement.

From the political aspects, China’s BRI announcement also reflected of the relative decline of the US as the world’s pre-eminent power. The BRI also deepens the Sino-Russian strategic partnership. However, India as a big worldwide economy distrusts the Chinese Initiatives and looks at it as an ambitious threat in the Indian Ocean area. The BRI has put some mid-powers like Australia in doubt to choose between the China and the US.