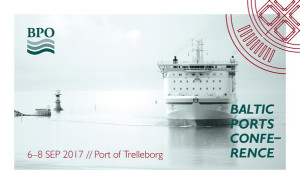 On 6-8 September 2017, the Port of Trelleborg hosted the annual Baltic Ports Conference organized by Baltic Ports Organization. Representatives of the European Commission, non-profit organizations, private companies and ports of the Baltic Sea Region and beyond gathered to discuss on the future of port industry.

The changing political landscape, regulations, trends in the shipping and port sector as well as digitalization were the main topics discussed by more than 120 participants within the DAY 1 sessions. During the DAY 2, the conference shifted its focus to the environmental side exploring the vast experience the Baltic Sea region has in the area of sustainability and its willingness to share this knowledge with others.

Facing change was the key topic od DAY 1, Lauri Ojala, Professor of Logistics at the Turku School of Economics, examined the implications of mega and regional trends in port industry. Fast technological progress, shifts in global economic power, demographic and social change, climate change and resource scarcity as well as rapid urbanization were some of the aspects influencing the trends in port development.

Oleg Dekthyar, Deputy General for Commercial Affairs at the Sea Commercial Port of Ust-Luga and Thomas Gylling, Head of Marketing for Port Solutions at Konecranes also mentioned the need to match volume dynamics and space restrictions due to ports usual location near cities as additional aspects influencing port development. It also has to be considered that different trends apply to different kind of ports, based on their size, geographical location and type of cargo handled.

Future and digitalization go hand in hand.  Advancements made in this area are set to have an enormous impact on the port industry. Ports need to not only identify the technology that matches their own, unique digital development strategy but also figure out how to properly implement it. Although digitalization is vital to the further evolution of the port industry, it does not remain without risks. Cybersecurity needs to be considered indispensable when taking steps into this new field.

Indra Vonck, senior port expert at Deloitte, stated the necessity to not only innovate, but innovate in the right way. The need for the port and shipping industry to innovate is driven by pressure and structural changes with digital extending the range of innovation possibilities as OT and IT converge. This enables digital to provide opportunities across the entire value chain.

The topic of digitalization has been expanded upon by Hendrik Roreger, Head of Business Intelligence at the Port of Hamburg Authority. He shared with the audience three fields of action for digital seaports – digital enhancement of infrastructure, building of data infrastructure and establishment of digital culture.

Change does not only affect technological and economical aspects of port development. The political landscape across the Baltic and Europe is also in constant flux. In his keynote speech, Bo Petersson, Professor of Political Science & IMER at the Malmö University, stressed the role of Europe as a beacon for uncontested and untainted core values of the EU, especially in these times, characterized by severe pressure under which liberal democracy finds itself.

DAY 1 also featured speeches by Brian Simpson, the European Coordinator for the Motorways of the Sea programme, explaining its recent status and plans for the future and an overview of the implementation process of port regulations presented by Konstantinos Rigas, Head of Unit “Ports & Inland Navigation” at the European Commission.

Baltic’s unique position as a leader for green and sustainable ports and maritime transport took the center stage during DAY 2 of the BPC 2017. Over the years, the Baltic ports and shipping lines implemented, with great success, a broad range of technological and managerial solutions in order to comply with various environmental regulations active in the region. The time has come to share the vast amount of experience gathered over the years with other members of the maritime community.

Participants of the discussion panel dedicated to the topic of exporting of Baltic environmental standards took a closer look at the possibilities for synergies between different approaches to environmental compliance. The good amount of cross sector cooperation has been praised, as well as the ability to think outside the box. It remains to be seen when the investments in green technology are going to pay off and while there are still doubts in regard to the economical point of view, the importance of the social one cannot be denied. The need to communicate Baltic’s efforts and achievements has been mentioned multiple times.

The panel, featuring Ditte Folke Henriksen, Head of Section at the Danish Maritime Authority, Poul Woodall, Director for Environment and Sustainability at DFDS A/S, Ulf Siwe from the STM Validation project and Gert Nørgaard, Manager Strategy & Planning at the Copenhagen Malmö Port attracted many voices from the audience. Our host, Tommy Halen, stepping down from his position as the Managing Director at the Port of Trelleborg, summed up the discussion, saying that “it is important that ports are the frontrunners” and first to take steps towards a green future instead of waiting for the authorities.

Baltic Sea region’s long-standing tradition of innovation has been further explored in a special panel showcasing some of the most interesting projects, recently garnering a lot of attention and additionally underscoring the breadth of experience it has to offer.

This year also saw a slightly different approach to the development of the maritime transport industry, as Mia Rolf, CEO at Ideon Science Park, talked about the single, most important force behind every successful business – creativity. The port industry faces times of dynamic change, rapid evolution and unrestrained innovation. It needs to carefully define its challenges, since creativity and creating something new does not come without costs.

The day also featured presentations analyzing environmental priorities in view of the benefits they can carry for Baltic shipping by Poul Woodall and a look at the influence of the LNG terminal in Swinoujscie on energy security in East & Central Europe by Sławomir Sieradzki, Deputy Director of the Development Division at GAZ-SYSTEM.

A study tour of the Port of Trelleborg concluded this edition of the Baltic Ports Conference.