Memorandum of Understanding signed between the Ports of Civitavecchia and Barcelona

Di Majo (AdSP): “Together with Barcelona we will implement a new intermodal TEN-T corridor that unites Spain with the Balkans or Greece” 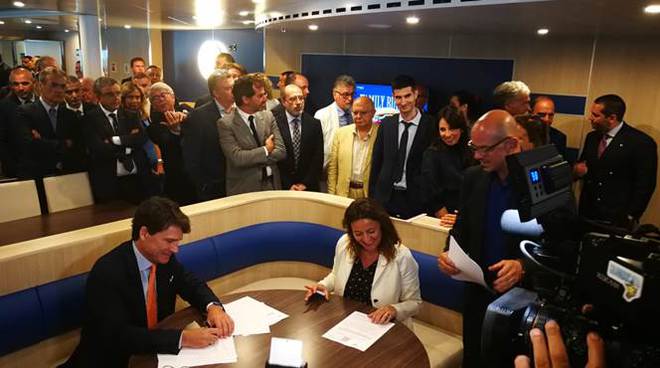 Civitavecchia – Memorandum of Understanding signed between the Port Authority of the Northern Central Tyrrhenian Sea and the Port Authority of Barcelona. On the sidelines of the presentation ceremony of Grimaldi’s new Cruise Rome, the AdSP president Francesco Maria di Majo and the president of the Catalan Port Authority Mercè Conesa i Pagès signed the agreement of mutual benefit and long-term collaboration, in the perspective to strengthen relations between the two Mediterranean ports.

For over a decade, in fact, the latter have been connected by a daily service operated by the Grimaldi Group company and since then many projects and initiatives have been carried out, starting from the European Escola de Short Sea Shipping to the recent European BClink project: MoS for the future, co-financed by the European Commission in 2017 within the framework of the “Connecting Europe Facility” (CEF “Connecting Europe Facility”). BCLink, in particular, aims to improve and build infrastructures in both ports in order to enhance the capacity of their respective land and sea facilities. In Civitavecchia, in fact, work will soon start on the construction of a new wharf with two new moorings for Ro-Ro ships, while in Barcelona, the Contradique wharf currently used for solid bulk thanks to “BClink” will be destined for Motorways of the Sea.

After the memorandum of understanding with the CAR (Centro Agroalimentare Romano) and that between the two major Italian and Spanish agri-food markets, CAR and Mercabarna, we have finally signed the memorandum of understanding with the Port Authority of Barcelona which will lead to a further strengthening of the intermodal corridor between the port of Civitavecchia and the Spanish port “, explains the president of the AdSP. “The memorandum of understanding aims to increase trade between Spain and Italy with a view to relaunching the strategic role played by Mediterranean ports within the trans-European transport network,” continues Majo. “In this sense, with the Barcelona Port Authority, we are committed to promoting the construction of a new TEN-T intermodal corridor, which connects Spain to the Balkans or Greece via the maritime link that connects the ports of Civitavecchia and Barcelona, as well as the ports on the Adriatic coast to Croatia or Greece ”.

“We are in a very important phase for the motorways of the sea”, underlines the number one of Molo Vespucci. “With Barcelona a strong synergy has been established to the advantage of the development of commercial traffic, also in the fruit and vegetable sector following the agreements between the two most important European agri-food centers, the CAR and the Mercabarna”. “Traffics that, thanks to the BClink project – continues by Majo – will be further strengthened while still paying particular attention to environmental protection”.

“Today with the commissioning of the Grimaldi vessel, which is part of the” zero emissions in port “program, the daily connection between the port of Barcelona and that of Civitavecchia becomes even more competitive from the environmental point of view. Among the first activities that we want to pursue, together with the Catalan Port Authority, will be the deepening of the study of the socio-economic advantages that can be measured in terms of c.d. ‘cost savings deriving from negative externalities’, ie those advantages deriving from the movement of road transport by ship (which in the case of Italian-Spanish traffic essentially passed along the roads and highways of southern France and Northern Italy, including those in Liguria) ) that determine a reduction in costs related to road accidents, noise emissions, traffic congestion, air emissions and so on. According to a first analysis made by the AdSP annually the Civitavecchia-Barcelona route allows to reduce the socio-economic costs by some tens of millions of euros, “concludes Majo.