Synchromodality as a tool for decarbonization and optimization of logistics

The transport sector is crucial to our global economy and one of the pillars of the international and interregional trade. However, it counts for remarkable negative impacts like emissions, noise, and congestion. This urges for a modal shift toward structuring a more efficient systematic network which allows the full use of available potentials in the whole transport sector. Recently, efficient combination of the multiple modes of transportation like rail, ship, and truck within an integrated system is the focus of attention. It is to be achieved without any handling of the freight itself when changing modes. The method reduces cargo handling, and enhances security, reduces damage and loss, and allows freight to be transported faster speed.

In this respect, the European Union defined the Intermodality as “a characteristic of a transport system whereby at least two different modes are used in an integrated manner in order to complete a door-to-door transport sequence”. The resultant global approach enables the available transport capacity to be used more rationally.”

However, the door-to-door supply chain has the potential to experience a bigger jump beyond the intermodality approach, thanks to new innovations in ICT and data-systems integration.  With the help of digitalization in this area, real “synergy” could be set up between the actors involved in the supply chain and logistics. As a result, Synchromodality concept created beyond other concepts of Uni-modality, Multi-modality, and Inter-modality, in order to have an optimal use of transport available capacity. (See figure 1). 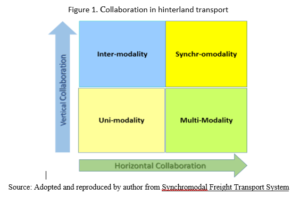 As a concept, synchromodality tries to give more role to rail and inland waterway transport while suggesting an effective and smooth switch between these two modes and road transport. It looks at the freight transport from an entire modal network perspective, to select the modes and routes based on optimization principle.

Synchromodality is defined as an “evolution of inter- and co-modal transport concepts, where stakeholders of the transport chain actively interact within a cooperative network to flexibly plan transport processes and to be able to switch in real-time between transport modes tailored to available resources. The shipper determines in advance only basic requirements of the transport such as costs, duration and sustainability aspects. Thus, transport processes can be optimized and available resources sustainably and fully utilized” (Haller et al., 2015). Paul Ham in 2012, also described it as “ Making optimal use of all modes of transport and available capacity, at all times, as an integrated transport solution”. Therefore, synchromodal transport is a well-thought use of all accessible capacity. (See Figure.2). 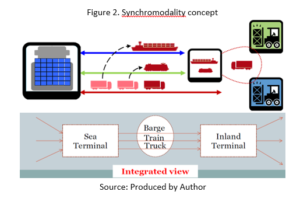 The concept is principled on two elements of transport networking and mode-free bookings. It enables the transport company to pack up the bookings of goods from customers and optimizes the flows. Effective cooperation allows transferring of goods in a resource-efficient and flexible way. In addition, the use of integrated digital data systems helps to choose the most efficient path of goods in a smart way. It means prioritizing and balancing time, cost, services and even special features such as carbon footprint.

At EU level, in spite of focusing on the low-carbon economy, Synchromodality is unknown in the most regions of Europe, except in Belgium, Netherland and Luxembourg. From an environmental perspective, while the majority of attention are on the shipping industry decarbonization, a systemic synergic approach in logistics, hinterland, and transport can significantly promote the environmental performance of freight transport. For this purpose, the key aspects of the synchromodal transport are illustrated as below. 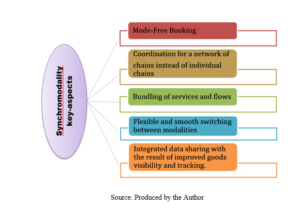 There are four drivers that are considered the ones which can accelerate the door-to-door supply chain toward connective networks within a synchromodal framework:

However, there are challenges for applying the synchromodal transport framework at port hinterlands. First, is networking and collaboration with the core of trust and customer relationship concept. The establishment of such a network is based on mutual respect and trust, as the most important prerequisite for synchromodal processes. Due to the fact that many entities are not willing to cooperate with competitors, a new way of thinking is required to generate a synchromodal network which is concentrated on trust and the advantages of cooperation instead of competition. The second limitation is complexity in planning. Planning and also the simulation of transport routes are   vital to   create   an   effective   synchromodal   transport   network.   Items such as new customer preferences, route traffics, and accessible resources of logistics nods should be assessed and examined prior to planning. Monitoring and forecasting are crucial factors for optimization of the transport performances.  Accordingly, a freight transport network is to be set up based on the demand mapping and forecasting tools. The third restriction is the connectivity of the existing different IT systems and data-sharing platforms. A high-quality data-sharing platform is a key to have a mutual exchange of data from different stakeholders such as shipping company, freight forwarders, and port terminal.

Apart from the mentioned constrains, there are four groups of barriers for the application of a synchromodal transport network:

However, the synchromodal benefits overweight and motivates the actors, in particular, multimodal transport companies and logistics hubs, for a modal shift to Synchromodality. According to a study conducted by  Joana Cunha at the University of Lisbon,  benefits originating from the application of synchromodal framework at port and shipping logistics are:

In short words, the goal of synchromodality is to substitute a long-term transition from unimodal transport to smart, flexible and sustainable networking transport. Within this framework, multiple transport modes are used from intermodality while the element of efficiency is borrowed from the concept of comodality. In this way, the existing resources of transport are used in an optimized and sustainable approach. Implementing effective synchromodality depends on various requirements. As the concept basically builds upon synergy and systematic coordination between stakeholders along the transport chain. It means that close cooperation is the core concern with the result of efficient and the flexible use of resources.