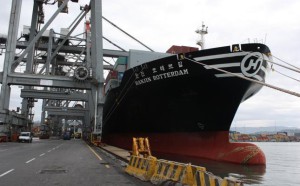 Over the course of the initiative, the project consortium gathered evidence and carried out an analysis to prove that glycerine is a technically viable, low emissions alternative fuel for the marine market.

The GLEAMS project consortium says there are many potential ‘niche’ markets for the adoption of glycerine fuel that would benefit from its non-toxic, clean burning and safe characteristics.

This project has been successful in dismissing the widely held view that glycerine is unsuitable for use as a fuel due to its physical and chemical properties. According to the project, it could be used as a fuel in compression ignition engines – a demonstration that was given through a glycerine-powered emissions test engine at Mercator Media Ltd’s Seawork International 2014 exhibition, which took place in June.

Currently produced as a by-product of the bio diesel industry and in surplus supply, glycerine could be used to power a range of smaller vessel types and shore applications, but not the world’s deep-sea shipping fleets. However, the GLEAMS project partners say there is potential for a significant increase in glycerine supply from other organic renewable means such as salt-stressed algae.

Now, the partners say they will outline a plan for its commercialisation, which includes pilot operational usage. Early potential adopters for the fuel include windfarm support vessels, research and education vessels and superyachts. In addition, a potential market for shore side power has been recommended as a special case where subsidies could be available in the UK.

Already, the GLEAMS project has seen global interest from vessel operators, engine manufacturers and bunker providers around the world as well as others keen to learn about this sulphur-free alternative fuel.