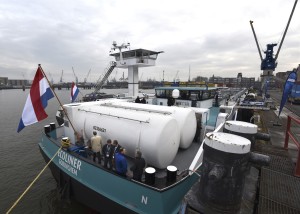 The three year project cost a total of €34 million, 17 million of which were provided by the European Union from the TEN-T Programme.

Two LNG vessels were also present at the event – the Danser Group LNG retrofitted container vessel Eiger-Nordwandand Damen’s 100% LNG-fuelled type C tanker EcoLiner. On the quay, Scania and Iveco displayed their latest trucks and TNO showed the LNG-tank that has recently been used in a two hour fire test. In the Seinehaven, the first European LNG-fuelled vessel, Deen Shipping’s Argonon was on display.

The event concluded with an overview of all results from the project, along with new LNG Projects being announced, like the new ReaLNG project which involves Shell, the Port of Lübeck, STC-Group and Port of Rotterdam.

In all, the LNG Masterplan project saw 33 EU-funded partners from 12 EU Member States and one associated partner from Switzerland come together to help realise the first LNG artery in Europe and develop a roadmap for the future. Their collaboration has resulted in more than sixty main deliverables.

These have included the first LNG terminal on the Danube being built by Bulmarket DM Ltd. in Ruse, Bulgaria, as part of the LNG Masterplan project activities.

Port of Antwerp drafted a technical concept leading to building and environmental permits and a tender assigning a concessionaire for the construction and operation of a dedicated LNG bunker station. The new bunker station for vessel is expected to be operational in January 2019.

Steps towards the provision of alternative fuel infrastructure were also completed in Galati and Constanta in Romania or Komarno in Slovakia.

Successes aside, not all European countries have been equally successful at introducing LNG, nor have they been successful across all sectors. The view from the event was that the shipping industry is lagging behind. Many barriers still have to be overcome for the wide-scale adoption of LNG to take place.