Bari, Italy (PortSEurope) December 2019 – The presidents of two of the Southern Italian port authorities have sent a joint letter to the Minister of Infrastructure and Transport to update TEN-T transport networks, improving links between the west and east coasts of southern Italy. 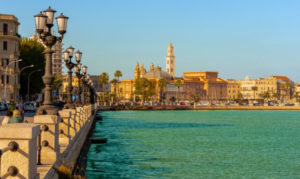 The Trans-European Transport Network (TEN-T) is a European Commission policy directed towards the implementation and development of a Europe-wide network of roads, railway lines, inland waterways, maritime shipping routes, ports, airports and rail-road terminals. The infrastructure is essential to maintaining the European Union’s competitiveness and wealth.

The corridors could be reconfigured in two ways: a north-south extension of the Scandinavian-Mediterranean Corridor to the Ancona-Pescara-Bari-Taranto-Brindisi section, and/or the Baltic-Adriatic Corridor, which currently stops in Ravenna, extending it to the entire Italian Adriatic-Ionian side.

The presidents see the potential transport extensions as an important business opportunity for the port nodes of southern Italy, also considering the current scenario of international transport in the Mediterranean area and the intermodal challenges facing Italy’s national transport network.

They will also seek the support and involvement of other regions in Southern Italy – Basilicata and Molise.