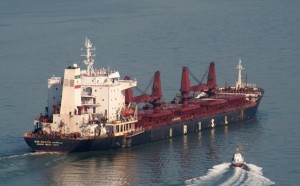 Terminals, traffic and lines: the Italian and Iranian shipping industries have formed a tight alliance. The visit of President Rouhani introduced a series of important agreements for the sector. The Messina Group is first in line and it’s ready to cooperate with the state company in Tehran (the IRISL, Islamic Republic of Iran Shipping Lines) on trade with Europe and beyond. As a matter of fact, Messina has a long tradition of services to Africa, Iran’s target market, and thanks to the Genoese group, it could finally reach it. The Messina fleet can now count on eight Ro-Ro container ships recently built in Korean shipyards, which are particularly suited for the African ports. The Iranians are very interested not only in the agreements with Italian companies, but also in establishing themselves in Italian ports.

Actually, there have been long talks about the possibility of further investments on Italian soil, and Tehran has declared its willingness to establish a terminal company in some ports that IRISL could consider strategic. The Iranian groups would be interested in acquiring several docks and thus entering the European market on this front as well, not only on transportation. The shortlist of attractive ports is still being finalized, but the focus is on Genoa, La Spezia and Naples on the Tyrrhenian Sea, and Ravenna, Venice and Trieste on the Adriatic Sea. After recently signing generic agreements, Tehran will put its foot down on the accelerator to define in detail its arrival in Italy: “It is a huge opportunity for us and the shipping industry,” says Augusto Cosulich, European agent of IRISL and director of the majority of the operation.

It is difficult for Italian ports to quantify the increase in traffic once all agreements will be in force, but “it is clear that Tehran wants to make Italy its control hub in the Mediterranean.” The presence of Gianluigi Aponte, MSC’s number one, at several meetings with the Iranian leaders, is proof that the world’s second container transport group intends to focus strategically on Iran. Fincantieri will do the same; it has signed a number of framework agreements that could lead to contracts “for hundreds of millions of Euros.” The Italian group will develop joint activities: in particular thanks to a cooperation agreement with Azim Gostaresh Hormoz Shipbuilding Industry (AGH), efforts will focus on a new shipbuilding complex in the Iranian Persian Gulf within the “Persian Gulf Special Economic Zone”.

AGH is controlled by one of the largest Iranian companies, active in the development and industrialization of the country. “The agreement provides for cooperation in both the construction of new merchant vessels and offshore units, both in the field of ship repairs and conversions, as well as refitting of units.” Working groups will soon be established between the two companies. Isotta Fraschini Motori, a Fincantieri subsidiary, has signed two agreements for the marine propulsion and the rail transport sectors. And it’s not only shipping: infrastructure was also included in several agreements signed between Italy and Iran. In February, Transport Minister Delrio will visit Tehran with a delegation from the sector. In total, the value of all contracts signed amounted to €17 billion. It is a raft of 24 agreements which will increase in the coming weeks. From transport to engineering, through shipbuilding and refining. In particular, Saipem brought home a collaboration on major projects in Iran with the company Persian Oil & Gas Development. Saipem should begin work to modernize and expand the Pars Shiraz and Tabriz refineries. The second agreement was closed with the National Iranian Gas Company.