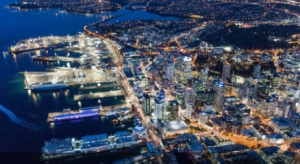 Research by University of Auckland scientists in the waters of the Hauraki Gulf found noise from cargo, container and tanker vessels overlapped the vocalisations of Bryde’s whales (Balaenoptera edeni) and the common reef fish, bigeye (Pempheris adspersa) up to 20% of the time.

Study co-author associate professor Craig Radford from the Institute of Marine Science, said: “Communication space is the range at which two species can hear each other and this study has found the range at which bigeyes and Bryde’s whales can communicate is significantly reduced when a ship comes past.”

Every time a vessel passed within 10km of a listening station, it reduced communication space for bigeyes by up to 61.5% and by up to 87.4% for Bryde’s whales.

The biggest impact from ship noise was at Jellicoe Channel, the most regularly used shipping lane into Ports of Auckland where vessel passages were recorded 18.9 percent of the time.

Ports of Auckland (POA) told GreenPort that in 2012 it co-developed The Hauraki Gulf Transit Protocol to try to reduce the number of Bryde’s whales being killed by ships.

The protocol, which included a voluntary 10-knot speed restriction through the Hauraki Gulf, was introduced in September 2013 with the support of shipping companies calling at POA.

The protocol was and still is voluntary, in recognition of the fact that shipping can be delayed by weather and other circumstances, and ships sometimes need to travel faster to make up for lost time.

In 2012 the average ship speed through the Hauraki Gulf was 14.2 knots and now the average is 10 knots. There has only been one whale death since the protocol was introduced and no whale deaths since September 2014.

POA’s head of communications Matt Ball said: “We are very pleased to see that the positive impact of our work to reduce whale deaths is also making life better for whales by reducing the noise level of passing ships. We will continue to work with shipping companies to keep ship speeds low for the benefit of our local whale population.”

POA pointed out that the study notes that further reduction in noise is likely to come from ship design improvements rather than further speed reductions, the increasing number of recreational vessels will also contribute to noise.

It added that it is expecting a stable or declining number of ship visits in the future.

Sound is used among groups of species to ensure survival including finding a mate, defending territory and warning of predators, explained the University of Auckland.