The global maritime industry is cautiously optimistic about the global business environment for world trade but also concerned about challenges to industry recovery including the potential impact of trade tensions, cyber-security and fuel costs, according to a new survey. 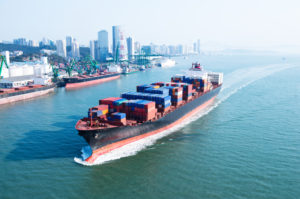 82% of shipping professionals anticipate either improved profitability over the next 12 months or continued stabilisation and reduced losses, according to the Navis Business Bellwether report, which was conducted in September and October 2018. However, just 12% of respondents are “very optimistic” about the global business environment, another 46% express cautious optimism and 41% say they are either somewhat or very concerned.

Brian Hibbert, CIO of International Container Terminal Services (ICTSI), said: “I would not expect a significant change in profitability in the next 12 months. I expect more activity when it comes to mergers and acquisitions in the terminal operating space as companies try to optimize their portfolios to achieve a profitable position.”

Topping the list of industry concerns is the rise in trade protectionism and new tariffs. One third of all survey respondents said they were “extremely concerned” about trade tensions, with another 36% saying they were concerned. Cyber security was also high on the list, with 29% indicating extreme concern and another 37% expressing concern. Only 11% of respondents were extremely concerned about an economic slowdown. However, when assessing potential risks to the industry, economic growth ranked high and just below trade protectionism.

At an industry-wide level, improving collaboration and operational planning across the supply chain is seen as the most critical need, followed by supply chain visibility, cost efficiency and productivity, port throughput, and faster turnarounds and delivery times.

When asked what areas of the ocean supply chain are most in need of increased efficiency and process improvement, 30% of respondents included port processes and throughput in their top four choices.

Some 90% of respondents said their organizations would raise technology spending in the next 12 months. The top areas for increased technology spending, in descending order, include automation, business intelligence, planning and management systems, big data analytics, and SaaS applications and cloud services. Blockchain and IoT sensors were significantly lower on the priority list.