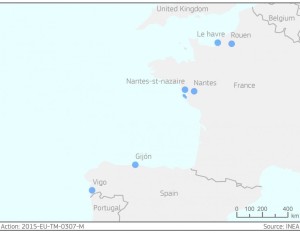 S/F SamueLNG for a Blue Atlantic Arch Action is the first phase of a Global Project aiming at improving the sustainability of marine traffic by promoting marine LNG as a viable fuel source for small vessels.

To accomplish this, the following investments are foreseen within this Action: • A pilot activity, namely the LNG retrofit of the Samuel de Champlain dredger vessel from Marine Gas Oil to a dual source fuel engine system. • The completion of studies on LNG bunkering (risk assessment in the port of Nantes Saint-Nazaire, a mobile bunkering unit in the Port of Gijon and a floating device in the Port of Vigo) • Environmental Impact studies in the ports of Rouen, Le Havre and Nantes Saint-Nazaire • The training of staff involved in LNG operations in Ports of Nantes SaintNazaire and Rouen • Dissemination of the Action results to the maritime community

Completion of these activities will represent a significant step to the advancement of LNG as a fuel source, and will enable the second phase of this Global Project, which include the further installation of the mobile LNG shore unit in the Port of Gijon and the bunkering of the floating barge in the Port of Vigo.