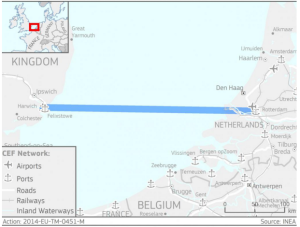 The present Action aims to upgrade a Motorways of the Sea link in the Northern Europe as well as to increase awareness about the scrubber technology all over the European Union. Located on the North Sea-Mediterranean, Rhine-Alpine, and North Sea-Baltic Core Network corridors, the Action focuses on increasing the environmental performance of short sea shipping routes.

Closed loop scrubbers will be installed on two ships sailing on the short sea shipping routes between Harwich (UK)-Rotterdam/Hoek van Holland terminal (NL), to upgrade an important maritime link on the TEN-T core network. Furthermore, the two scrubbers will be fitted with a measuring device for continuous follow-up of cleaning system efficiency. The proposed Action will also develop chemical and waste management guidelines for scrubber use, create a “Scrubber Observatory Platform” to enable exchange of best practices among stakeholders, and share the knowledge gathered through SME trainings.

As part of the proposed Action, an IT platform will be deployed, contributing to the CEFT objective on developing telematics applications and complying with the EU Directive on reporting formalities. Improving Port efficiency will also be addressed under the present Action through a number of IT upgrades in ports, including the development of a Terminal Management System in the Port of Rotterdam and the Port of Harwich.