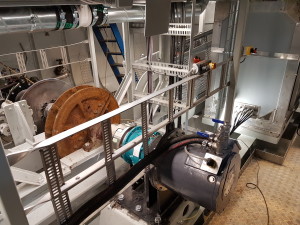 Harbour cities across Asia depend on diesel ferries to transport millions of passengers each year. They are a dirty but necessary part of life, with marine transport adding to air pollution that is blamed for thousands of deaths each year and adding to greenhouse gas emissions, writes Kimmo Rauma, CEO and founder, Visedo.

The Taiwanese port city of Kaohsiung is a prime example. The city relies on its ferry network to transport passengers across its bustling harbour – the fourth largest in the world. Kaohsiung’s harbour activity is typical of many cities in Asia. Yet this activity comes at a cost – in nearby Hong Kong, air pollution is believed to kill 3,200 people per year.

So the Kaohsiung City Government took action. As part a drive to improve air quality, the authority tasked Taiwan’s Ship and Ocean Industries R&D Center (SOIC) with reducing emissions from its harbour ferry fleet. Specifically, SOIC required an efficient and cost-effective solution for reducing emissions and decided hybrid and electric power was the best solution.

The first step was considering electrification for a vessel on the popular Cijian Island passenger route. The particular vessel was the 100-tonne, 23m-long Ferry Happiness, which transports 15,000 passengers every day using its two 300HP diesel engines. Launching from berth every 15 minutes, Ferry Happiness, carries an estimated eight million passengers every year along the 650m route.

SOIC needed a more manageable generation system that was smaller, lighter and yet still robust and approached Visedo to assist. A major challenge was generating the required power. Replicating electrification commonly used in large ships wasn’t an option, since the bulky AC generation systems are unsuitable for small passenger ferries.

The DC power was then delivered as needed using Visedo inverters. In systems like this, power is converted to a variable AC current to control propulsion with a fixed 400V AC output powering the on-board microgrid, where electronic devices can be plugged in, or to multiple DC voltage requirements.

All of this is completed with a Visedo PowerMASTER inverter. Visedo’s sophisticated software coordinates power flow, allowing PowerMASTER to perform different power conversion tasks depending on how it is controlled. This single-component approach made it a simple task to retrofit the existing diesel engines, as well as saving space, and making spare part management easier.

The result was Asia’s first hybrid electric ferry and a model for the region.

The new e-ferry is capable of a top speed of nine knots and its Visedo system ensures pure electric cruising for half the ferry’s operation time. With fast shore charging, this can easily be higher. This will save more than 25,000lt of fuel every year – emissions from which will no longer be pumped into Kaohsiung’s air. Efficiency is also boosted while the hybrid system also reduces operational noise and greatly reduces maintenance costs.

Following the success of this project, the Kaohsiung City Government plans to retrofit the rest of its diesel fleet to reduce pollution levels around Taiwan’s largest harbour.

ChihHung Lin, the head of system development, at our project partner SOIC, said the project was an important first step for reducing Kaohsiung’s marine emissions.

“Like many East Asian harbour cities, in Kaohsiung ferries play a key role for everyday public transport, often playing the role that buses do elsewhere. Taiwan’s ‘Harbour Capital’ has long suffered from air pollution and only a few years ago, the average person was consuming double the national Taiwan average of carbon dioxide.

“In response, the Kaohsiung City Government committed to cleaning up its fleet and is currently considering the possibility of replacing all 11 of its vessels with this new type of e-ferry. All of this has been made possible with the expertise of Visedo’s marine team in delivering custom electric drivetrain solutions.”

Asian focusWe at Visedo helped develop a cost-effective and efficient way for the harbour city to reduce emissions and operating costs. The expertise of our dedicated marine team assisted in swapping noisy, dirty and expensive diesel for quieter hybrid electric power, with no compromise on power.

The project may have been a first for Asia, we know that it certainly won’t be its last.

In April this year we opened our first Asian office in Hong Kong. This followed our signing a letter of intent with venture capital and private equity fund management company, Beijing Capital Investment, which we think will assist the company in accessing China’s booming electric vehicles market. A month later we signed a historic production and co-operation agreement with Asia’s largest electric motor producer TECO Electric & Machinery Company.

Why is this important? We see Asia as a particular focus for us. China is already the world’s single largest electric vehicle market and the greater Asia Pacific region – driven by demand in China and Japan – is forecast to be the world’s fastest growing market for electric vehicles by 2022. We see the electrification of the Asian marine segment as being on a similar path. With the region’s hundreds of thousands of diesel vessels, and the associated health and environmental issues they cause, Asia is of upmost focus for companies like ours working on the electrification of transport.

I founded Visedo in 2009 with a clear belief that electrification could be done better. Up until then, competitors making electric motors for ships, buses and machinery were adapting standard industrial technology to create new motors. We knew this approach was obsolete and didn’t serve the customer.

We set out to do things differently, engineering our electric drivetrains from the ground-up. I assembled a team of the brightest minds I could find in the industry and together we continued to design the most efficient, smallest, lightest and most robust hybrid and electric drivetrains we could. Our hardware and software advances delivered crucial efficiencies but the added value that we create for clients is not merely technological. We offer the best expertise in the electrical system as a whole.

Large marine vessels have for some time benefitted from electric propulsion – reducing emissions and costs. Smaller vessels, however, which vastly outnumber their larger counterparts and collectively create far more pollution, have struggled to replicate this success.

There is often an implicit assumption that systems that work can simply be scaled up or down. This is certainly not the case for electrification of marine vessels. Electric propulsion approaches used in larger vessels are big, heavy and complex – they simply don’t scale down and certainly not at a viable cost.

Electrification of large fleets of small vessels holds great opportunity for reducing costs and emissions. The dream of replacing diesel engines and ending associated pollution is fast becoming reality – in marine as much as any other industry. But achieving this for small vessels needs a new approach driven by a different way of thinking.

Part of the problem is that large vessel electrification uses AC systems – an approach originally designed for transmitting power over long distances. However, in small vessels a DC system is much more flexible and easily manageable than the AC system and, in practice, is the only viable solution to electrification.

In this approach, a generator creates the power – in the case of Visedo’s generators, using synchronous reluctance assisted permanent magnet (SRPM) technology, which offers smaller dimensions, lighter weight and higher efficiency than alternatives, which are distributed in DC.

Small DC/DC-converters and power inverters can then be used to convert power as required. Electric power inverters convert power to AC to drive the propulsion motor, whilst just as easily converting it to standard 400V output in a microgrid. Electronic components are like muscles in the body – they perform their function excellently, but they only work together if the brain tells them what to do. In a Visedo-powered electric vessel, the function of the brain is played by sophisticated software, and the CPU it runs on.

At the simplest level the software controls the switching on and off of power semiconductors.

When using the latest semiconductors, this happens up to 8000 times per second, and controls power flow. Taking this a step further allows us to coordinate power flow from our generator, controlling the torque and speed of the propulsion system on the one hand, whilst powering the microgrid on the other.

Rather than scaling this down, we make inverter units autonomous and responsive to their environment. The units monitor the input voltage and adapt their behaviour to maintain a steady voltage level, automatically balancing the consumption and production of energy. Furthermore, our Smooth Thrust algorithm automatically transfers power generated to the dc-bus onwards to the propellers. Increasing power generation directly increases propulsion power–creating a digital version of a drive shaft.

A modern electric power inverter is a marvellous piece of hardware consisting of silicon chips that process hundreds or even thousands of kilowatts of electrical power. But it is the software that defines what an inverter is capable of.

By applying sophisticated software to manage these components, we have allowed inverter technology to leap forward 20 years to the modern age, allowing much more intelligent management of power distribution. Not only does this software approach allow power to be carefully managed, it also keeps things simple. We can use one piece of hardware to perform the task of many different products by using software to control it.

For example, our PowerMASTER inverter can be used to create a grid inverter for when the vessel is connected to the shore power, a DC/DC-converter to manage multiple voltage requirements and a converter for creating the on-board microgrid when the vessel is sailing. All this is simply achieved by using software to control the inverter differently in different scenarios. This approach saves space and weight, lowers the cost of retrofitting and makes spare parts management simpler.

Visedo developed an electric solution specifically for the Integrated L-Drive and Veth Propulsion will use Visedo’s technology exclusively for the application. The propulsion system has been already ordered for several projects currently under construction, one vessel designed for serving the aquaculture industry and two separate yachts.