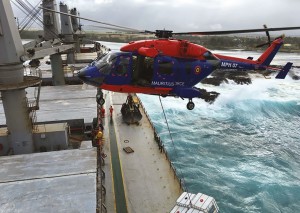 Members of the International Salvage Union (ISU) provided 213 services to vessels carrying more than 2.5 million tonnes of potentially polluting cargoes during operations in 2016.

Top of the list were calls to attend cargo vessels containing bulk polluting/hazardous chemicals, crude oil and refined oil products.John Witte, President of the ISU, said: “Members of the ISU are often the only agency available with the necessary resources and experience to intervene in a casualty situation. And there is no doubt that, yet again, in 2016 our members’ services have helped to protect the marine environment from potential damage.”The data comes from the results of the ISU’s 2016 Pollution Prevention Survey, which was re-evaluated in 2014 to include a wider range of potential pollutants, including containers and hazardous and dirty bulk cargoes.ISU’s survey started in 1994 and back then the threat of pollution was considered to be largely from oil and refined products carried by VLCCs and other tankers.That threat still exists, but today coastal state authorities consider most cargo to be potentially polluting. Added to this, container trade has increased dramatically and the capacity of boxships is now far greater than in 1994.The survey takes account of the International Convention on the Prevention of Pollution from Ships (MARPOL), the International Maritime Dangerous Goods Code (IMDG Code), Intercargo guidance, P&I Club guidance; International Tanker Owners Pollution Federation publications and the International Solid Bulk Cargoes Code.In other news, the ISU has presented its Meritorious Service Award to the Italian Coast Guard in recognition of its extraordinary efforts in handling the Mediterranean migrant crisis.In the first nine months of 2016, the Italian Coast Guard rescued 26,000 people at sea, including 6952 people on one single day in August. Italy has rescued more survivors in the last two years than in the previous 23 years combined.