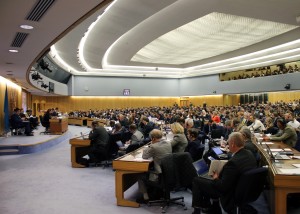 The Marine Environment Protection Committee (MEPC) of the International Maritime Organization (IMO) has approved mandatory requirements for ships to record and report their fuel consumption.

This mandatory data collection system is intended to be the first in a three-step process of analysis to allow a decision to be made on whether any further measures are needed to address greenhouse gas emissions from shipping.

IMO Secretary-General Kitack Lim said: “The unanimous agreement to take forward a mandatory data collection system for ships’ fuel consumption is a significant step. It will provide a solid basis on which to consider, armed with information, whether further measures may be required in future to mitigate GHG emissions from shipping.”

Under the system, ships of 5,000 gross tonnage and above will be required to collect consumption data for each type of fuel they use, as well as other, additional, specified data including proxies for transport work.

The anonymous aggregated data will be reported to the flag State after the end of each calendar year and the flag State, which will be required to subsequently transfer this data to the IMO Ship Fuel Consumption Database.

This data collection system is enshrined in draft amendments to the International Convention for the Prevention of Pollution from Ships (MARPOL), which were approved at the meeting.

The draft mandatory data collection requirements will be put forward for adoption at the 70th MEPC session in October this year and could enter into force in 2018.

The International Chamber of Shipping (ICS) welcomed the progress made at MEPC 69. Speaking from IMO, Mr Hinchliffe said that the priority now is to persuade the European Union to adjust its unilateral regulation on the reporting and verification of individual ship emissions to make it compatible with what has now been agreed at IMO.