The developmental prospects of the use of LNG as marine fuel in East Mediterranean have been presented during the Poseidon Med II awareness event at Posidonia Exhibition 2016 on Tuesday 7th June 2016.

Poseidon Med II partners from the shipping and gas industry joined marine governmental officials and industry experts to exchange views about the projected developments towards the wide adoption of LNG as a safe, greener and viable alternative fuel for shipping.

Secretary General of Ports, Port Policy and Maritime Investments, Christos Lampridis referred to the preparation of Ministry’s plan on the LNG as fuel infrastructure development. He highlighted the crucial role that the Hellenic shipyards could play towards the LNG era, by taking a significant part of the retrofit market and contributing to the financial growth of the country. “It would be great if the Greek shipyards could have a share in the retrofit market. A whole new infrastructure in ports and networks is necessary and the Ministry will promote and facilitate the construction of an LNG bunkering stations network in the Greek ports”.

Panellists debated the transition to the LNG era from a holistic perspective. George Polychroniou, Executive Director, Strategy, Development, Administration & IT, Public Gas Corporation of Greece (DEPA) S.A., stated that LNG has been used in Greece since 2000 for conventional uses. The development of small-scale LNG Infrastructure in Greek core ports, will enable the utilization of LNG for bunkering and other new uses and Poseidon Med II is working to make this possible in the near future. “DEPA, the leading LNG supplier in Greece is contributing towards the realization of this goal.”

The paradox between a very strong marine sector and its small access to financing mechanisms was presented by Dr Panayotis Zacharioudakis, Managing Director of Ocean Finance Ltd, who referred to Europa Ship Plan, an initiative aiming to upgrade to the new era the short-sea fleet. “Our goal is the shipping sector to take advantage of the existing financial tools, such as EFSI, European Regional Fund, Cohesion Fund etc.”

Safety protocols and standards of LNG bunkering were also in the event’s spotlight, being presented by Thanos Koliopulos, Global Special Projects Manager, Lloyd’s Register, who referred to risk assessment methodologies and regulatory framework. “We have responded to the technical challenges by developing a clear methodology which provides effective solutions to the whole bunkering fuel chain”.

Yiannis Papagiannopoulos, Director PFSO-PSO, Head of Port Security Dept., Piraeus Port Authority, shared Piraeus experience in Poseidon Med II project, underlining the importance of the use of LNG as marine fuel. “Actually we expect that the Port of Piraeus will play the leading role similarly to the one that the Port of Rotterdam has in the Baltic Region. The Baltic model of a major leading hub and a set of satellite ports will be applied in the case of Piraeus”.

Efstathia Niarchou, Project Manager, Industrial Clients Projects, Hellenic Gas Transmission System Operator S.A. (DESFA) referred to the undergoing upgrade of the LNG infrastructure in Revithoussa. “The 2nd Upgrade that will be developed under the program Poseidon Med II, for the refueling of small LNG carriers, bunkering vessels and tankers, has the potential to transform Revithoussa LNG terminal into a hub of major strategical importance, distributing LNG in Eastern Mediterranean.”

The effects of LNG as a marine fuel to the general sustainable development and the aspects that make it the “fuel of the future” were presented by Dr. Dimitrios Lyridis, Assistant Professor of the Athens Technical University. “LNG should be used as an opportunity to create synergies within the Shipping sector and with other sectors.” Finally, the experience of the Baltic Region in the retrofitting of ships was presented by Sjoerd Helmer, Business Development Manager of Anthony Veder. “Early involvement of all partners in a LNG value chain is key in developing the emerging small scale LNG market”

The event presentations are available here

Poseidon Med II project is a practical roadmap which aims to bring about the wide adoption of LNG as a safe, environmentally efficient and viable alternative fuel for shipping and help the East Mediterranean marine transportation propel towards a low-carbon future. The project, which is co-funded by the European Union, involves three countries Greece, Italy and Cyprus, six European ports (Piraeus, Patras, Limassol, Venice, Heraklion, Igoumenitsa) as well as the Revithoussa LNG terminal. The project brings together top experts from the marine, energy and financial sectors to design an integrated LNG value chain and establish a well-functioning and sustainable LNG market.

This project has been funded with support from the European Commission. This publication reflects the views only of the author, and the Commission cannot be held responsible for any use which may be made of the information contained therein. 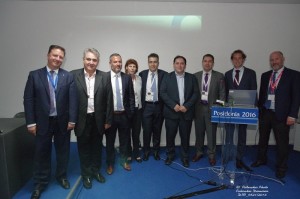 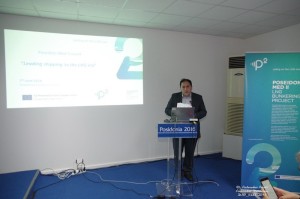