The workshop began with on-site survey of Patras Port area, discussing the feasible scenarios for LNG bunkering installations and potential appropriate sites within the port, setting the foundations for the technical studies development.

During the workshop, through the active contribution of 28 participants, a fuel calculation review of LNG fuel requirements for two currently operating types of Ro-Pax vessels on the Bari and Ancona routes was estimated. Additionally, significant issues on LNG supply chain were critically evaluated, taking into account the needs for natural gas for domestic and industrial use in Patras area. Possible site positions for the small-scale LNG installations were proposed by Stavros Antypas, Director of Holding & Development Department representing Patras Port, which were also discussed during the workshop.

A list of areas for further action and assessment was developed and this is to be further detailed by the project partners.

George Polychroniou, Project Manager of Poseidon Med II- Executive Director, Strategy, Development, Administration & IT, of Public Gas Corporation of Greece (DEPA) mentioned: “The development of LNG bunkering facilities at the Port of Patras, is considered as a key milestone towards the establishment of LNG as an alternative fuel for marine transport, in the Eastern Mediterranean and especially Greece. Further expansion of these facilities, to enable access to natural gas of households, commercial and industrial users in the city of Patras, and customers located in the region of Western Greece, constitutes an important viability and sustainability parameter for the full deployment of the project.”

Nikos Kontoes, President & Managing Director of Patras Port Authority, noted: “Patras Port Authority is an active partner of the European project Poseidon Med II, which explores possible LNG installations for bunkering and undertakes the relevant technical studies for the participating ports. For Patras Port, the establishment of an LNG unit for bunkering operations, expandable for industrial and domestic use, is of high priority.

The arrival of natural gas in Western Greece is a continuing demand expressed by political, scientific and industrial stakeholders of the area, as well as critical factor for boosting the economy. It offers societal and financial benefits, contributing to the protection of the environment of our urban area”, he added.

What is Poseidon Med II project?

Poseidon Med II project is a practical roadmap which aims to bring about the wide adoption of LNG as a safe, environmentally efficient and viable alternative fuel for shipping and help the East Mediterranean marine transportation propel towards a low-carbon future. The project, which is co-funded by the European Union, involves three countries Greece, Italy and Cyprus, six European ports (Piraeus, Patras, Limassol, Venice, Heraklion, Igoumenitsa) as well as the Revithoussa LNG terminal. The project brings together top experts from the marine, energy and financial sectors to design an integrated LNG value chain and establish a well-functioning and sustainable LNG market.

Below the Photo Gallery 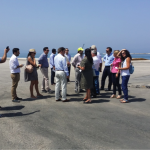 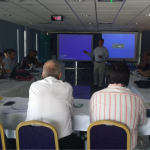