Ports ‘should be at the forefront’ of UK strategy 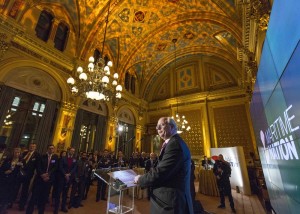 The UK government should put its ports at the heart of its Industrial Strategy, according to ABP chief executive James Cooper.

Speaking at the Foreign and Commonwealth Office during a Maritime Nation event, Mr Cooper highlighted the vital role UK ports can play in growing exports.

He said: “The UK is a maritime nation. We are an island surrounded by sea, one might think that those drafting our new industrial strategy might usefully start by acknowledging that fact.”

The event was held in support of the Government’s Exporting is GREAT campaign and aimed to showcase the strength of the UK’s maritime offer.

Mr Cooper continued: “There is a powerful case for ports and maritime to be at the forefront of a strategy to boost exports, front and centre of a wider industrial strategy that cuts across Government.”

“The UK must raise its sights and adopt a global approach in our drive to boost trade and boost exports. Indeed, a positive global outlook, being ambitious and being enterprising are qualities which are embodied by our maritime industries.”

Maritime Nation aims to raise awareness of the vital contribution of the marine and maritime sector and how it provides vital access to European and global markets for UK manufacturers.

Mr Garnier concluded: “The UK’s maritime industry generates an impressive £22bn for our economy. Our ports provide British businesses with a gateway to the global market, with 95% of Britain’s trade in goods currently moved by sea.”

“Boosting exports would be impossible without the support of our thriving maritime sector and we will continue to work together with Britain’s ports to help secure our place as a global trading nation.”