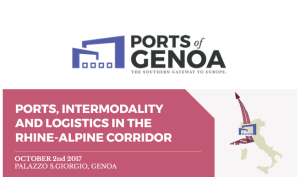 On Monday 2nd October, in Palazzo San Giorgio, Genova, the “Ports, Intermodality and Logistics in the Rhine-Alpine Corridor” workshop will be held. This is the first event on an international scale to be organised by the recently established Western Ligurian Sea Port Authority, chaired by Paolo Emilio Signorini, who will open the proceedings at 9.30, after the welcome address of Marco Bucci, Mayor of the City of Genoa.

Three European Corridor Coordinators (Pawel Wojciechowski, Rhine Alpine Corridor; Carlo Secchi, Atlantic Corridor and Brian Simpson, Motorways of the Sea) will provide an overview of the EU transport and infrastructure policies, presenting their eminent point of view on the future of Ligurian Ports and Italian North Western logistic network as Mediterranean Gateway to the European markets.

In the following technical sessions, representatives of European ports, shipping lines, transport and logistics operators and shippers will discuss the issue of the efficient integration of the supply chain from sea to hinterland, through technological innovation, transport infrastructure development, railway service improvement and cooperation among the operators along the transport chain.

One year after his visit to Liguria in September 2016, the Rhine-Alpine Corridor Coordinator Pawel Wojchiechowski will have the opportunity to verify the progress of the ongoing works in the ports and along the Northbound railway lines, with an inspection of the Terzo Valico construction site organised in conjunction with Regione Liguria, RFI and COCIV on 3rd October.

The  workshop is part of the Communication activities of the Vamp Up Project, cofinanced by the EU through the Connecting Europe Facility tool and aimed at improving the multimodal node of Vado Ligure.

The workshop program is available on www.portsofgenoa.com.