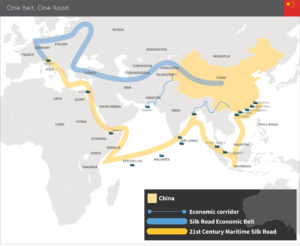 Porsche AG, a German automobile manufacturer specializing in high-performance sports cars, SUVs and sedans, has started exporting cars made in Germany by rail to markets in China. Porsche does not manufacture vehicles in China, so will use the “new Silk Road” to deliver products to Chinese markets.

The new Silk Road (part of the Belt and Road initiative also known as One Belt, One Road, or OBOR) is a Chinese economic strategy to seek better access for Chinese-made products in European markets, which encompasses acquiring stakes in ports and other transport facilities, including railways.

The rail journey takes around 18 days, compared to the sea route via the Suez Canal, which takes three weeks longer and is more expensive. So far, approximately 80,000 new sports cars are delivered to Bremerhaven by DB AutoZug GmbH to start the 18,500-km sea route to Guangzhou, Shanghai or Tianjin annually.

The 11,000-km rail journey, via Poland, Belarus, Russia and Kazakhstan to Chongqing in southwest China, is organised by Osnabrück-based Hellmann Worldwide Logistics, and includes two trains weekly, each carrying 88 vehicles. This is equal to 11% of Porsche’s exports to the Far East, the limit of current rail capacity on the route, with the remainder continuing to use the traditional sea route.

The Northern Adriatic port of Koper is a leader in handling vehicles and volumes were up nearly 2% on 2017 (754,400 units) and it is increasing investment and development of infrastructure to increase storage capacity.

In the port, there are 35 kilometres of industrial railway lines which lead to various warehouses and quays. The north-eastern part of the port, where cars are mostly store, lacks access to the railway network.

A planned new series of railway tracks that will facilitate loading and unloading of cars from railway wagons, will shorten the vehicles’ transportation routes from trains to parking lots or to other loading points within the port.

Also, a new Ro-Ro berth for car-carriers will consist of a series of individual fenders against which ships can lean, as well as of a concrete loading ramp. The surrounding sea bed will have to be dredged as well. The new berth will significantly shorten the transportation routes, especially those taking to the warehouses on the right bank of the river Rižana.

The new Ro-Ro berth and the new railway tracks whose total value is estimated at €12 million are part of the investment project co-financed up to 30% by the EU CarEsmatic project. The purpose of the project is to increase the use of motorways of the sea for transportation of new cars in the Mediterranean basin, thus improving accessibility to the ports of Koper and Barcelona.

In addition to Luka Koper, the partners in the CarEsmatic project also are Barcelona Port Authority, the terminal operator Autoterminal S.A. and the shipping company Neptune Lines. Luka Koper is also investing in services to support the forecasted increase in electric vehicle (EV) shipments.

The first German rail service to China started in 2008 from Duisburg. In 2011, the carmaker BMW began to supply parts from Leipzig to its Chinese plants.