PON(Operative National Plan), how Europe can increase the level of logistics in South Italy 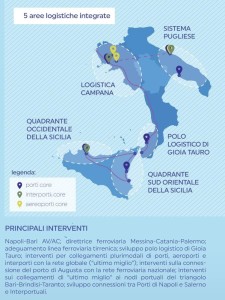 Inside the different types of EU’s program, at the moment one of the most important it is the PON Program.
PON has the aim of promote and improve different target established in a multi-years plan. Italy at the moment and in particularly the infrastructure, both land part and sea part.
The major subject touched have been the ports, and in particular, the South ports of Italy with masterplan that according to the minister of infrastructure and transport Delrio, shall be the key for the relaunch of logistics and the Economy.
The capital ready to be invested is 4.520.161.290 Euro, the distribution between Bruxelles with the FESR and 2.615.519.290 Euro in the national found.
The list of ports involved: Naples, Taranto, Bari, Brindisi, Gioia Tauro, Catania, Messina Cagliari, Porto Torres, Olbia.
The major intervention, will be made in the area of ports of Naples and Salerno and relative Inland port with the development of infrastructure that increase the connection with the principal transport network and Europe TEN-T corridor.
In the port of Gioia Tauro, the biggest for the transshipment segment with the increase of infrastructure and superstructure giving the possibility to become a gate port serving the relative hinterland, offering opportunity of job with the rise of local welfare.
The plan make easier for the region, also the choice of where send parts of financing buying train, it will support the call for bids for public transport, make stronger the contract with Trenitalia adding the number of services.

Source: On the MoS Way Staff