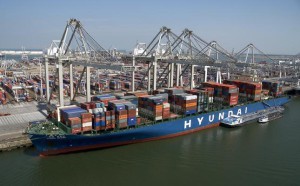 Copenhagen – Plans to build a large container terminal in the northern district of Copenhagen, Nordhavn, have been cancelled, reports Berlingske Business.Copenhagen Malmö Port, the company operating the port, has decided to take some time to consider other locations, including the possibility of moving the terminal to Køge, a market town south of Copenhagen. Køge is currently undergoing a billion kroner expansion of its port and gaining a strong position as a transport hub with several large warehouses Massive urban developments Alongside the large construction projects in the port, the town is also getting a new super hospital, a new train station on the line between Copenhagen and Ringsted, a new neighbourhood in the city’s northern part and a lot of new apartment buildings and offices near the centre. Meanwhile, Nordhavn’s urban development is progressing quickly. The Århusgade neighbourhood, for example, has already been completed and all the apartments sold. The first residents are expected to move there in April.