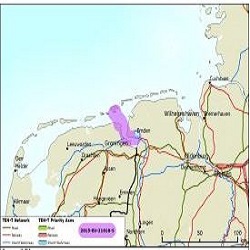 The specific objective of this Motorways of the Sea project is to deliver the pilot development and testing of the innovative methodology for LNG retrofitting. One of the vessels that are operating the Borkum service will be converted to LNG by retrofitting its propulsion system in an innovative manner.

The project constitutes the continuation (Phase 2) of a previous action MariTIM implemented under INTEREG IV which is an R&D project with feasibility study.

Based on the findings of this R&D project, the first vessel under German flag will be retrofitted and equipped with LNG propulsion. The pilot project takes the function of the demonstration project in the framework of the LNG Master Plan in the Wadden Sea and will aim to drive the development of the accelerated introduction of LNG in the Wadden Sea.

This in turn will contribute to the realisation of the general objective that is to establish the Wadden Sea as an environmental model region for both, the accelerated introduction of LNG as alternative fuel for ships.

The project will also contribute to achieving the objective of the Sulphur Emission Control Area, to reduce the SOx to 0.10% as of January 2015.