Partners in the logistics chain 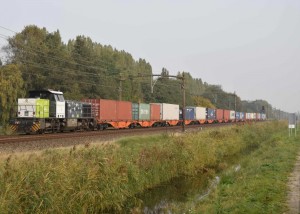 The Port of Rotterdam is one of the partners involved in a major new €2.2 million logistics project focusing on blockchain technology to improve the efficiency of the transport sector.

In the joint project, with TKI Dinalog, TU Delft, ABN AMRO, the SCF Community, Royal FloraHolland, SmartPort and 10 other partners, will use blockchain technology, which uses an open network of databases and functions as a public digital ‘ledger’, to unite operational information, financial flows and contracts.

During the project, the use of blockchain technology for logistics purposes will be concretely set up, tested and live tested.

TU Delft will concentrate on creating an open-source core business infrastructure that will make the blockchain suitable for mission critical usage.

Its PortShuttle Rotterdam service serviced by GVT Group of Logistics has more than doubled since it was set up in 2015. The service is responsible for the exchange of containers between the various deep sea terminals.

The train already shuttled on weekdays every 24 hours between the container terminals on the Maasvlakte and the Rail Service Center Rotterdam in the Waal-Eemhaven area. Now, an additional service will be added six times a week, with connections to Tilburg and Eindhoven.

The connection allows the port to offer the speed and reliability that transportation by trucks lack due to the road congestion on the A15-A16.

“The PortShuttle is a service that genuinely adds value for the port of Rotterdam,” said Matthijs van Doorn, logistics manager at the Port of Rotterdam Authority. “Increased ease in the exchange of containers, the strengthening of the rail product and a nice sustainable solution for the port.”

Meanwhile, the expansion of the Rotterdam-Wolfurt link, which began in May 2016 and has been developing positively since.

The international logistics specialist, Gebrüder Weiss and its customer Blum Beschläge, the rail cargo operator, as well as the port, have established a twice weekly train service, which is now operated by numerous companies in Vorarlberg and the Lake Constance region.

The rail cargo operator AT supports this exchange, with two circuits per week between the Port of Rotterdam and Wolfurt.

Vorarlberg and the Lake Constance area are important hinterland regions for the Port of Rotterdam. It is not a coincidence that the port supports the local partners in expanding connections in Austria. The government of the Netherlands is also committed to a new programme for handling the intermodal Austrian market.

The port said that since other market partners have shown concrete interest, a further consolidation of the connections to Rotterdam is planned.