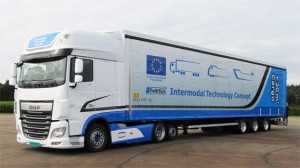 The EU-funded TelliSys project has designed a new, environmentally-friendly, volume-optimised, intermodal transport system for the European transport sector. It is already available on the market.

Whether by road, rail, water or air, economic growth depends on the efficient and timely delivery of goods. But this growth must be balanced against ecological considerations like the need to reduce carbon emissions. As one can only assume there will be a continuous increase of tonnes transported per kilometre in the coming years, this balancing act will become increasingly challenging.

“In order to handle this increasing transport demand without having to suffer heavy ecological and social repercussions, multimodal logistic chains must be optimised,” says TelliSys project coordinator Alexia Fenollar Solvay.

According to Solvay, the break in this multimodal logistic chain is the cargo container itself. “The containers currently used for intermodal transport are simply outperformed in terms of flexibility and costs by the mega-trailers commonly used in road transport – trailers that are not optimised for water or rail transport,” she says.

To fill this gap, the TelliSys project designed a new intermodal transport system that combines the benefits of mega-trailers and multimodal containers. The result is an innovative intermodal concept comprising a volume-optimised MegaSwapBox (MSB), super low deck tractor and suitable trailer.

The project began with an in-depth analysis of the current status of European and intercontinental cargo transport standards. To understand how loading units and standard equipment were being used, researchers interviewed numerous actors involved in cargo transport, including forwarders, producers, ports, inland terminals, and railways operators.

With this information in hand, the TelliSys consortium quickly realised that a one-size-fits-all solution would not work. Thus, they began to design tailor-made containers for particular markets, resulting in the MSB family of containers. Furthermore, to transport the MSBs, a new super low deck tractor unit with an 85 cm fifth wheel height (to keep total vehicle height under EU-mandated four metre limit) had to be developed. The concepts were then put to the test, with potential users able to evaluate the designs. From this feedback, the MSBs were further refined before being moved to production and taken to market.

The MSB family consists of 13.75 metre containers available in continental, automotive and intercontinental versions. The system is the first loading unit able to efficiently transport up to 100 m3 by road, rail and water – making it extremely competitive against the mega-trailer. With an internal height of up to 2.97 m and a flexible loading process, customers who typically transport cargo via road with the mega-trailer may soon begin to move towards the TelliSys intermodal option.

For those still on the fence, TelliSys researchers have further good news. After substantial testing, it was concluded that their intermodal concept offers users up to 15 % in cost savings over the mega-trailers. More so, because it allows more volume of cargo to be transported in a single load, meaning less trucks on the road, the system also has a significant positive impact on the environment, with a 25 % reduction of Global Warming Potential (GWP) compared to current road transport technologies.

“As of 2008, the potential for a modal shift from road to rail in Europe has been estimated to be about 5.6 %, which is not enough to reach EU goals,” concludes Fenollar Solvay. “Innovative transport systems like TelliSys help to increase this number by enabling efficient intermodal transport of voluminous goods that shifts the modal split in favour of rail or barge transport.”