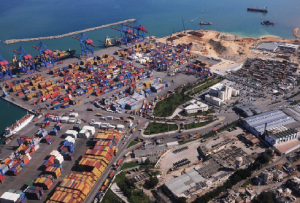 The final conference of the “Optimed Project – Rationalising Mediterranean Seaways from Southern to Northern-Eastern-Western ports” will take place on 18th December at the “Palacio de Pedralbes”, in Barcelona, in the headquarters of the Union for the Mediterranean (UfM).

The meeting in Barcelona will be an opportunity for the partners to make a final assessment of the efficiency, effectiveness and sustainability of Optimed project, based on the results obtained through the activities carried out in the two-year duration of the project. The event will involve the delegates of the government institutions of the territories affected by the project, as well as experts and technicians of the institutional bodies involved, including: Salvatore D’Alfonso – Senior Programme Manager, Transport and Urban Development Division – Union for the Mediterranean, Massimo Deiana – Sardinia Region Transport Councillor, Anwar Zibaoui – Coordinator of ASCAME (Association of Chambers of Commerce and Industries of the Mediterranean), Paolo Fadda – University of Cagliari, Hassan Kraytem – President of the port of Beirut and Pere Pedrosa – General Director of the Directorate for Mobility and Transport of the “Generalitat de Catalunya”.

The meeting will be hosted at the headquarters of the Union for the Mediterranean (UfM), the international organization bringing together the 28 EU member states and partner nations bordering the Mediterranean Sea, with the declared goal of strengthening political relationships between the two shores. Among the UfM priorities, the construction of maritime and land highways to improve the fluidity of trade between the two sides.

The event will consist of two different sessions.

During the morning, after the welcome address of all institutional partners, the speakers will illustrate the path Optimed project have gone through, analyzing the future prospects. The session will be completed by a round table on the theme of ”Increasing freight maritime transport between Europe and regions of the Middle East: a challenge for Sardinia, Cataluña and Lebanon”.

The results achieved through the implementation of Optimed project will lead to important innovations to the concept of shipping goods in the Mediterranean basin.