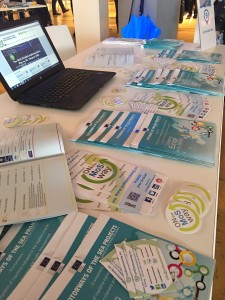 The Van Nelle Factory in Rotterdam, one of the icons of 20th-century industrial architecture and belonging to the UNESCO World Heritage list, had a pleasure to host the 2016 edition of TEN-T Days from 20th to 22nd of June.

The event was organized by the Directorate-General for Mobility and Transport of the European Commission in cooperation with the Dutch Presidency of the Council of the European Union, Minister for Infrastructure and the Environment Melanie Schultz van Haegen.

Between more than 75 stands, leapt out the On The MoS Way one, that this year participate as the official Motorways of the Sea web portal involved in the MoS Workplan by Mr Brian Simpson OBE.

onthemosway.eu was born in 2012 thanks to EU Co-financed project of TrainMoS and during the course of years, its functions and tools grow up so fast and in relevant way for Motorways of the Sea world.

Furthermore, since January 2016, onthemosway.eu is the official place to publish news on the MoS Detailed Implementation Plan that the EU coordinator Mr. Brian Simpson OBE presented to the European Parliament in June (Read more here)

The TEN-T Days were the occasion to meet “offline” the audience and discuss with them about the portal and the contents.

MoS Projects, LNG box and Shipping: these are the most read and appreciated sections of the site; the Newsletter received great reviews and the Twitter Account was the most popular among the Social Channels.

We received also some constructive criticism, but the feedback were especially positive, both in terms of presence at the stand and of comments.

A special thanks to all those we met at the TEN T Days 2016!