Ocean alliance ‘unlikely to have major impact on Singapore ports’ 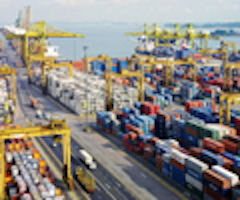 The new Ocean alliance which will comprise some of the world’s biggest container operators is unlikely to have any major impact on Singapore’s ports, according to HSBC Global Research.
It noted that the mega shipping alliance will likely maintain two hub ports in the Strait of Malacca, Singapore and Westports in Malaysia, due to “its sheer size”.
French shipping giant CMA CGM – which is buying Singapore’s Neptune Orient Lines – signed a deal last Wednesday with China’s Cosco Container Lines, Evergreen Line and Orient Overseas Container Line to form the new network.
It is slated to commence operations in April next year, subject to approval by regulators in China, Europe and the United States.

Mr Parash Jain, HSBC head of transport research for Asia-Pacific, who wrote the report, noted that the Ocean alliance will be bigger than the 2M alliance, currently the world’s largest and comprising the top two liners, Maersk Line and Mediterranean Shipping Company.
The Ocean alliance will have a 37-per-cent market share by capacity in the main-lane east-west routes, covering 40 services and deploying over 350 vessels.
Mr Jain said in the report that the Ocean alliance will be “slightly positive” for container shipping firms like Orient Overseas (International), for which he maintains a “buy” call. “(This is) as it would be part of a bigger alliance versus its current G6 alliance, where a number of its partners are facing financial difficulties and have limited bigger vessels.”

He said other beneficiaries include China Cosco and Evergreen, as their competitiveness should improve by being part of an alliance with “bigger vessels, better capacity management and services, and a more formidable challenge to the 2M alliance”. On the other hand, Hanjin and Yang Ming, both rated “reduce”, will be left to find alternatives, which may not be easy, given their high leverage. He said Hapag-Lloyd will be aligned with weaker players too and will need to order bigger vessels to stay competitive.
Mr Jain also noted in the report that most other shipping lines left out of the 2M and the upcoming Ocean alliances have weak balance sheets with high leverage. “Continued losses for the sector, loss of competitiveness due to departure of alliance members and potential termination could trigger an exit or merger and acquisition activity for these weaker players and set a course for a recovery with more supply discipline, in our view.”