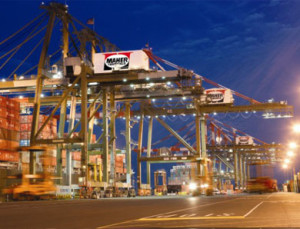 The NYK group has announced that its port operating subsidiary acquired a 20% share in the Port of New York/New Jersey’s Maher Terminals together with investment fund Macquarie Infrastructure Partners III (MIP III).
MIP III, which is a diversified, closed end fund which focuses on investments in infrastructure and related assets in the US and Canada, has a minority stake in NYK Ports.
The deal is part of the NYK group’s medium-term management plan ”More Than Shipping 2018,” which includes plans to strengthen its global network and enhance synergy between terminals and container vessels.
Deutsche Bank first announced reaching an agreement to sell its 454-acre Maher Terminals to MIP III in April 2016, without disclosing the terms of the deal.
The German bank, which had acquired the terminal for US$2.3bn in 2007, said at the time that the sale marked “another important step in Deutsche Bank’s commitment to the reduction of legacy assets”.
Maher Terminals, which has a capacity of 3m teu annually, is the largest terminal in the port.
Following completion of a construction project to raise the Bayonne Bridge’s clearance in late 2017, the terminal will be able to accommodate container vessels of up to 14,000 teu.