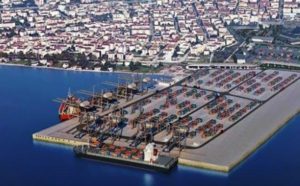 Once the railway connection is commissioned, DP World Yarımca terminal will start serving customers in Ankara, Eskişehir, Bilecik, and Kütahya as well, providing an easy and economical means to carry metal and mineral ore, marble and machinery.

Rubber-tired gantry cranes will enable fast and secure handling of trains, which will directly reach the shipboard.

The railway connection will allow for more secure and cost-effective cargo transportation to and from any location where Turkish State Railways infrastructure is available while also reducing environmental impact and minimizing risks. Moreover, it will help producers reach global markets at lower costs by means of various shipping lines calling at DP World Yarımca. The new junction line will also reduce the time cargo spends at the port thanks to its design, which facilitates faster loading and unloading.

Also, a railway line connecting the DP World port in northwest province Kocaeli’s Körfez district to the Caspian Sea and then to China via the Kars-Tbilisi-Baku Railway has started. Construction of the railway connection started in January and was completed in just six months.

In a speech, DP World Yarımca CEO Kris Adams stated that the railroad connected to China via the Kars-Tbilisi-Baku line and the Silk Road, stressing that Turkey, as a rapidly developing country with a young population of 80 million, a robust local infrastructure investment environment and high growth rates, holds a significant place in the global network.

“With an additional $50 million in the next six months, we will make a total investment of $600 million in DP World Yarımca, which was established with a cost of more than $550 million,” Adams said.

Minister Turhan emphasized Turkey’s position as a natural base in terms of logistics, adding they started a full transportation mobilization in this scope, describing transportation as the main wheel of both social welfare and economic structures in the modern world.

Turhan said that with the modern port, there is an “opportunity to serve in every part of the country with a railway connection. This also includes the Kars-Tbilisi-Baku Railway line, which we attach great importance to as the government. If we look at the issue from a wider point of view, essentially the Yarımca port provides a direct connection from China to London through this line.” The minister also recalled that the government has invested TL 133 billion in railways in this scope. “Thus, after 1950, an average of 18 km of railways were built annually, and since 2003, we have managed to build an average of 135 km of railways annually,” he noted.