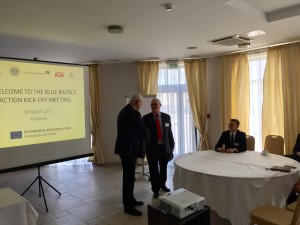 Mr Simpson commented the project and its goals using these words:

“Motorways of the Sea aim to provide green, viable and efficient sea-based transport links that are well-integrated in the entire EU transport chain and exploit the huge potential of maritime transport as the backbone of EU’s internal and international trade.

The Baltic Sea is one of the most heavily trafficked seas in the world, still when it comes to environment this region is ahead of the global environmental regulations for shipping.

In this context, as the European Coordinator for Motorways of the Sea, I welcome the objectives of the Blue Baltic project financed from the European budget thanks to Connecting Europe Facility.

I am convinced that the project will contribute to the implementation of the SECA and MARPOL regulations. It funds the development of a LNG bunkering network in the sea ports of the Baltic Sea and I hope that it will be a starting point for a more robust exploitation of LNG vessels in key Baltic bunkering locations.

Specifically in the Lithuanian context , the project has a potential to turn Klaipeda into a fully-fledged LNG hub serving as gateway for the LNG supply chain in heavily trafficked but environmentally clean the Baltic Sea Region.”