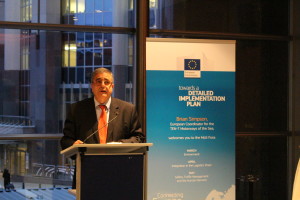 On 15th of March INEA headquarter hosted the first MoS Forum on Environment. Over 90 participants, including Members of the European Parliament, representatives of the EU Member States, and industry stakeholders gathered in Brussels to discuss the environmental aspects of Motorways of the Sea.

In June, Mr. Brian Simpson will present the Detailed Implementation Plan (DIP) to MEPs in European Parliament, so in preparation of this, three MoS fora have been organized on three pillars (Environment, Logistic chain and Human elements (both in May)).

During the Forum, José Anselmo – Principal Administrator of TEN-T Policy- Motorways of the Sea, DG MOVE, gave his contribution on the actual situation in Europe on the maritime and transport sectors and he concluded his speech presenting the Consortium in charge to work at the Motorways of the Sea (MoS) Work Plan, with the aim of supporting the European Coordinator, Brian Simpson, in developing the DIP.

Below the video of speech